Following a meeting of our Youth Assembly National Council today, we wish to affirm our support to the efforts of President Morgan Tsvangirai and the MDC Alliance in forging a coalition ahead of the watershed election next year. 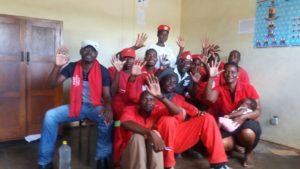 Those who say that a coalition is coming are not far off the mark. We are ready to work with everyone in the broader democratic movement in line with our Congress resolutions and the principles adopted by the party’s national council, the supreme decision-making body in between Congresses.

In our meeting today, the Youth Assembly agreed that it is high time that we defended our future. We cannot allow Zanu PF to do whatever it wants with us and in 2018 we are absolutely going to defend the people from Zanu PF’s terror campaign.

The MDC Youth Assembly is happy and content with the party’s decision to allocate a 20% quota to the assembly. As such we are now preparing the our candidates list for next year’s elections. The party has already advised us that all constituencies that we have been holding and those we contested are all youth constituencies

What (President Robert) Mugabe and his party did in by-elections  and the resurgence of the Zanu PF terror groups does not scare us, and we are warning them that this time around they must not press this violence button again. Enough is enough.

We are not going to allow Zanu PF to rig the 2018 elections as we are going to protect our votes and defend them vigorously. After 2018, Zanu PF must be history. It’s time for us youths and all Zimbabweans to define our own future by registering to vote.

Zimbabwe has now reached a defining moment and comrades we are not going back until Zimbabwe becomes free again.

We call upon fellow citizens to democratically and fearlessly fight for the establishment of an egalitarian society in which the rights of all citizens are upheld and respected.

As MDC Youth Assembly, we demand that the ZEC secretariat should be run by competent, non-partisan personnel.

We note with great concern the conflict of interest created by having the Judicial Service Commission Secretary (JSC) doubling up as the chairperson of the Zimbabwe Electoral Commission.

Today we humbly appeal to Rita Makarau to do an honourable thing and resign as chairperson of ZEC, because the world is watching and surely a better tomorrow is coming.

We also demand the demilitarisation and de-politicisation of ZEC through the appointment of commissioners in a public and transparent manner and the removal of military personnel from their positions within the ZEC secretariat.

We are saying to Mugabe leave office, while you can still salvage your fazed legacy. It is not a secret anymore, that Mugabe deserves to be in an old people’s home and is no longer fit to be the country’s leader.

He is visibly tired, clueless and has nothing new to offer than sleeping everywhere and anywhere he sits. We cannot allow a 93-year old man to lead us. We have become a laughing stock to the whole world for abusing an old man.

It is our duty as energetic youths to help this old man to pack his bags and leave State House peacefully in 2018.

We note with concern that while the youth in the country are wallowing in poverty Mugabe’s two sons Robert Junior and Chatunga are splashing millions of our money in South Africa and living large at the expense of the sweat of our parents. Given their abuse of money and drugs, we now know who stole the huge chunk of the missing $15 billion.

The national council of the MDC Youth Assembly also resolved that the proposed $1billion dollar Robert Mugabe University is not a national priority given that graduates from existing tertiary institutions remain unemployed, with most of them selling airtime. There is no adequate accommodation and there is no proper infrastructure at existing tertiary institutions, especially at Lupane University, Great Zimbabwe University and others dotted throughout the country.

We also resolved today that Mugabe’s legacy does not justify a national day being dedicated to his name. Rather than permanently etching his name into the national memory, Mugabe is actually someone the youth of this country want to forget as soon as he leaves office.

Lastly, we reaffirm our support to the coalition-building process and the consolidation of a formidable MDC Alliance. We believe the coalition will be the best platform through which to bring about the much-needed political change in the country. As the MDC National Youth Assembly, we are fully behind this process in line with the demands of the people of Zimbabwe.