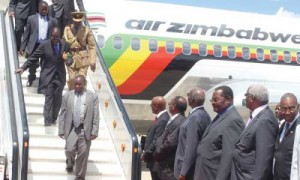 According to the Islamic Republic News Agency, Rouhani was expected to be sworn in on Saturday afternoon in a ceremony set to be attended by senior officials from 92 countries.

Rouhani had a landslide victory in May this year. He would be sworn-in for his second term.

A Bulawayo24 report said that Vice President Emmerson Mnangagwa would be acting president during Mugabe’s absence.