The Crisis in Zimbabwe Coalition (CiZC) is alarmed and worried at the wanton abuse of public funds following the award of close to US$1bn to President Mugabe to build a private university. The award follows an approval by cabinet to build a US$1 billion university in Mashonaland Central Province through a private foundation, the Robert Gabriel Mugabe Foundation whose trustees are President Mugabe and his wife, Grace Mugabe. 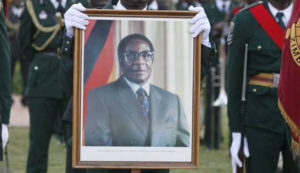 We hold that this is an unprecedented case of misplaced priorities by the government particularly the Professor Jonathan Moyo-run Ministry of Higher and Tertiary Education at a time that state-owned universities and colleges are struggling to provide quality and affordable education to students.

This development comes at a time when the government is failing to complete numerous projects such as the Matabeleland Zambezi Water Project which was mooted in 1912. We are worried that the government sees logic in allocating US$1 billion to the Mugabe family when treasury is failing to avail the US$10 million only allocated to the Matabeleland Zambezi Water Project under the 2017 Budget which is expected to cost US$ 864 million. Numerous other projects lie idle such as the Harare – Beitbridge dualisation project, Tokwe-Murkosi Dam, Gwayi-Shangani, Kunzvi and Mtshabezi Dams. These and many other government projects have become part of different finance ministers’ budget statements for decades, but little progress has been made.

The move also violates the Principles of Public Financial Management enshrined in the Constitution of Zimbabwe which bar misuse of public finances. We continue to raise the red flag and maintain that this is not new to Zimbabwe as the state has been conflated with the ruling party, a situation that has seen misuse of public funds during ZANU PF events.

We are equally puzzled that the move comes at a time when Zimbabwe is struggling with a perennial liquidity problem and when government can barely finance critical services such as health, education, shelter etc.  It is our view that the award will further increase the domestic debt which stood at US$3.7 billion by end of 2016, representing 26% of GDP (2017 National Budget Statement).

The move is reckless populism that will heap Mugabe’s personal gratification on the already unmanageable US$11.2 billion public debt and works against efforts aimed at cutting down unwanted government expenditure. As CiZC we hold that the grant award to the Mugabes runs counter to efforts by treasury to service both external and domestic debt as envisaged by the Arrears Clearance Strategy agreed with creditors in October 2015.

The Mugabe administration has become notorious for its extravagance in expending public finances, earlier this year reports revealed that the President Mugabe’s trips gobble around US$3 million each, while Professor Jonathan Moyo converted Zimbabwe Manpower Development Fund (ZIMDEF) funds to appease his constituency – a revelation that shows misplaced priorities at a time that the country is experiencing a crippling deflation. The outgoing Auditor General Mildred Chiri has been producing annual audit reports that show misappropriation and misuse of public finances in consecutive years.

We urge the government of Zimbabwe to review its priorities and abandon forthwith any unnecessary expenditure that will further increase debt to ordinary citizens and worsen the already unhealthy financial status of government.

We call upon the Parliament of Zimbabwe to exercise its constitutional duty of providing oversight on expenditure on public finances and urge Jonathan Moyo and President Mugabe to respect and uphold the Principles of Financial Management as enshrined in the Constitution.