The Mugabe family have dramatically expanded their property empire in the Mazowe area by giving themselves a billion dollars of government money to build a new university there to be called the Robert Gabriel Mugabe University with themselves as the trustees. 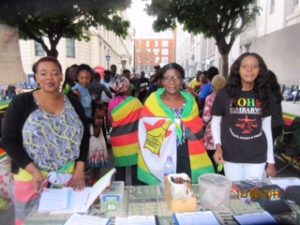 It will be convenient for their two sons, Robert Jnr and Chatunga Bellarmine, who were recently thrown out of their luxury flat in Johannesburg after a drunken and drug-fuelled party left a man with a broken leg and arm. There has been speculation that they could be relocated to Zimbabwe for ‘security’. Robert had already been ‘relocated’ from the United Arab Emirates for similar shenanigans.

Grace Mugabe missed a rally to go down to rescue the pair but they seem to have continued their profligate ways on a visit to Harare. The Zimbabwe Independent says they left patrons at Club 1+1 stunned by their extravagance, keeping tables in the VIP section overflowing with champagne and whiskey. One patron said he counted 51 bottles, costing an average of $190 each (see: https://www.theindependent.co.zw/2017/08/08/mugabes-sons-party-storm/).

Robert’s studies at the University of Johannesburg seem to have been a bit of a fantasy, with lectures hardly ever attended – certainly not in the morning when his chauffeur was rarely required. So a local uni run by mum and dad far away from the fleshpots of Joburg and 40 kilometres from Harare would seem to be suitable. And since Grace got her doctorate from the University of Zimbabwe after a few weeks’ work, it shouldn’t be too difficult for the boys to match this at their own place, so to speak.

‘The influence of champagne and whiskey on cognitive function’ might make a PhD thesis. Or perhaps closer to Grace’s interest, ‘The effect of privilege on child development’.

A fantasy? Yes, but the whole university project is a fantasy even though it was endorsed by the cabinet with much bogus solemnity. Zimbabwe already has going on for 20 universities struggling by on about $300 million in all. So where will the massive grant to the Mugabes come from? Not the Chinese who have already cooled on their offer to fund a new parliament building at Mount Hampden, 16 kilometres from Harare, which Mugabe declared was going to be the new capital city.

And, anyway, Zimbabwe’s 2017 budget already envisages a $400 million deficit this year, with total government revenue of only $3.7 billion. Most of this goes on wages, which would have to be cut by a third to pay for the billion dollar Mugabe tombstone.

FOR THE RECORD: 41 signed the register.