Johannesburg - An aeroplane en route to Harare, Zimbabwe, had to be towed back to its parking bay at OR Tambo International Airport on Wednesday, in order for a suspected car thief on a watch list to be arrested. 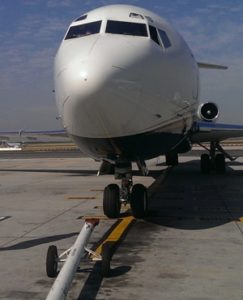 Police alerted the international airport aviation safety staff about the wanted car thief, on board an afternoon flight to Zimbabwe’s capital city, through the Airport Management Centre.

The man was placed on the watch list in 2014 after he allegedly rented a vehicle, but never returned it.

The suspect, Nicholas Marova Zvikovikomborero, was arrested on the plane.

In a statement sent on Thursday, Brigadier Vishnu Naidoo said that the “revised intervention”, which comes just under a month since the appointment of Major-General Helena Dimakatso Ndaba as SAPS commander, was proving to be effective and showing Ndaba’s team’s determination.

The “intervention” includes a number of security-intensive strategies, such as the installation of CCTV cameras in strategic areas and an increase in visible policing.

The measures were aimed at ensuring the safety and security of the airport, which is a national key point, Police Minister Fikile Mbalula announced in July.

The beefing up of security comes after a wave of serious crimes hit the airport, including robberies, heists and hijackings. Since then, some criminal activities had been foiled and had led to successes on the part of the authorities.

“These successes are the result of the intensified co-operation between [SAPS], Ekurhuleni Metro, airport management of OR Tambo International Airport, and other law enforcement agencies and government departments, which forms an integral part of this plan,” read the statement.

Naidoo told News24 that the suspect would appear in court soon.