At a meeting in Harare yesterday Mr. Mugabe stated quite clearly, that the persons responsible for the murder of white Zimbabwean farmers during the land invasions would “never be prosecuted”. Tens of thousands of people who were members of Zapu and lived in the south west of the country were murdered, beaten, raped, tortured and harassed between 1983 and 1987 during a campaign that Mr. Mugabe named “Gukurahundi” or the storm that “washes clean”. Over a million-people fled the genocide and moved to South Africa and Botswana. Not a single person has been prosecuted for any of these crimes. 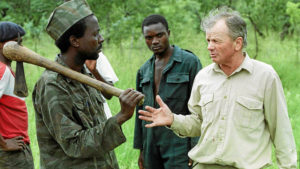 During the campaign that Mr. Mugabe called “Murambatsvina”, which roughly translated means getting rid of the “rubbish”, another 1,2 million people were displaced in 2005, this time from informal settlements around the towns and dumped in the bush hundreds of kilometers from town in the middle of winter. Thousands died of exposure and hunger. Their only crime was to vote against the Zanu PF Party of Mr. Mugabe.

In the seventeen years since the MDC mounted its campaign to get Zimbabwe back to its former status as a democratic State, over 6 000 of its leaders and members have been the subject of abduction and in many cases, never seen again. MDC has records implicating over 2 000 Zanu PF leaders and officers working for the security services which clearly record killings and gross human rights abuse. We have recorded over 700 murders of MDC leaders and the numbers imprisoned and beaten or tortured must run into thousands. So many have been hospitalized that we have an organisation that is solely dedicated to helping these victims with medical expenses.

In our first campaign in 2000, two young activists were burned alive in their vehicle while campaigning for Mr. Tsvangirai. Their killers were known and the case against them irrefutable – one was a member of the Central Intelligence Organisation – they were never arrested and charged. MDC tracked the CIO Officer for 15 years until he died of natural causes – as the leader of the duo he was promoted several times.

In my own case, I made a statement in the House of Assembly as a sitting member of Parliament in 2012 and was threatened in the House by a senior Zanu PF Member, then followed the next day for 150 kilometers, where four young members of the CIO threatened me and stated in front of my wife that “they could shoot me at any time and nothing would happen to them”. I laid a complaint with the police, identified all four with their ID and force numbers and the Bases from which they came – nothing, no investigation, no action.

The following is a list of white Zimbabwean farmers killed during the farm invasions:

What is not recognized very often is that 78 black Zimbabweans who were farm managers were also murdered during this period. Many were friends that I had known and worked with for many years. All fine men and women, completely dedicated to their farms and families and staff. The Constitution of the Country, crafted in London by the Foreign Office and endorsed by all the national leaders of southern Africa and by all Zimbabwean leaders, guaranteed property rights, security of person and the rule of law. It had been amended 19 times but these rights were untouched.

Since Independence in 1980, it was the commercial farmers who drove economic growth with output rising on average by 15 per cent per annum during the first 18 years. Increasingly they were being joined by black farmers and by 1997 some 1200 of the 6000 farmers that existed at Independence in 1980, were black. They employed a third of the national workforce, enjoyed no subsidies of any kind and generated half our exports. 60 per cent of local industry was dependent on them for markets or raw material. They were recognized as being among the most productive farmers in the world, holding world records in yields and advanced conservation techniques. Zimbabwe was totally self-sufficient in almost all foodstuffs at prices that were the envy of our neighbors.

Then they made a mistake – they voted for the opposition in 2000 and the gates of hell opened. In the next 5 years the infrastructure built up and paid for by the farmers was destroyed. 25 000 tractors of 75 horse power or more were stolen. 300 000 hectares of irrigation were destroyed, the equipment from transformers to pumps to pipelines, torn up and sold for scrap. 3 million head of beef cattle and hundreds of thousands of other animals including wild animals were slaughtered for consumption. 23 thousand homesteads and 350 000 staff houses were taken and in most cases burnt or vandalized. Farm buildings worth hundreds of millions were destroyed. 10 000 farm dams, built by the farmers themselves were left full and idle, many breaching when no maintenance was carried out.

In 10 years Zimbabwe crashed, in 2008 our inflation was doubling prices every three hours, three quarters of our population was on food aid, nearly all food was being imported and employment had crashed to just 10 per cent of all adults – 70 per cent in the Civil Service. The great majority of the farms taken over by force were derelict and abandoned – a third of our banks went into liquidation. We had 150 000 cases of Cholera, 60 000 cases of Tuberculosis and 50 000 cases of Malaria. One third of our population had fled the country and another 3 million had died of causes from malnutrition to starvation and exposure.

And this is all about the rule of law. Today Mrs. Mugabe, that disgrace of a “First Lady” has been allowed by the Zuma Government to leave the country after she committed a crime in Sandton and was being sought by the Police. She left from the same Military base outside Pretoria where the President of Sudan had been allowed to leave South Africa after a warrant of arrest had been issued against him. This shows total distain by the South African leadership for the rule of law and the belief that leaders are above the law. In this context Mr. Mugabe’s comment about the fact that the perpetrators of crimes against humanity in Zimbabwe will “never” be prosecuted takes on special significance.

We may mourn for everyone on that list above, but in fact we should be mourning for all of Africa, because it is everyone who suffers when there is no rule of law and I am afraid, that applies today to much of the Continent and perhaps more than anything, this explains our poverty and deprivation.