There is no doubt at all that poverty in Africa should by now be history or, if not history, then rapidly approaching it. 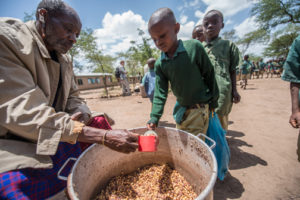 There is no intrinsic reason why all of you should not by now have been enjoying a Western-quality lifestyle or, if not that, then rapidly approaching it. Instead, the number of you in extreme poverty has gone up by a huge 300% since 1981. Don’t believe the claims by the UN, the World Bank and some NGOs that poverty is reducing in Africa. They have based that on false premises in order to artificially reduce the massive scale of the problem – or to prove that they are actually making progress. But reading the UN and World Bank’s own figures correctly actually produces the figure I have shown.

Even if the UN and World Bank were correct, the gap in incomes between you and Westerners has actually widened by almost 300% since 1960. But wasn’t the whole point of aid to help you get closer to Western standards of living, not further and further away from it?

There is no intrinsic reason at all why your slums should not by now have been rapidly reducing, to be replaced by Western-quality housing fed by reliable, universally available electricity, clean, safe drinking water coming out of your taps, and with flush toilets in every home. Instead, slums are taking over a bigger and bigger percentage of your towns and cities, with the percentage of your population that is forced to live in them rising year by year.

There is no intrinsic reason at all why excellent, Western-quality schools, academies and universities should not have been springing up all over Africa for some time now. Instead, a third of your children still get no primary education, almost half of you leave school without the necessary skills to create a better life for yourselves or your family, and only 8% of you go to academies or universities compared to 72% in the UK and USA.

There is no intrinsic reason at all why you should not all by now be served by excellent local doctors’ and dentists’ surgeries and local hospitals fully up to Western standards. Instead, you have ten times fewer doctors per head of population than Westerners have, with no sign of it improving.

In other words, the real facts about poverty in Africa have been hidden from you both by the Western aid community and by your own governments – obviously, because if they told you that actual truth – that after years and years of independence you are actually far worse off now than you were under colonialism – you might have got fed up with the situation some time ago and, as African citizens, got together to defeat poverty and oppression just as Western citizens did in order to get rid of their oppressive governments, and take themselves from poverty to affluence.

Although everyone knows there is a huge gap between African and Western standards of living, nowhere have I seen figures from either the Western aid community or your own governments explaining to you just how big that gap is. So let’s give you some facts and figures.

One you have seen already: the gap in incomes between you and Westerners has actually increased by almost 300% since 1960. But what does this really mean?:

So the typical Westerner earns between 23 and a staggering 59 times more than the typical African for doing exactly the same jobs!

Showing the huge gulf between Africa and the West from a completely different direction, in a healthy economy, by far the biggest source of revenue for a nation is – or should be – taxation: business taxation and personal income tax. Developed nations raise enough in taxation to deal with their faces of poverty themselves, but no African nation does. And when you look at personal taxation, you can see why: 44% of Westerners pay it, but less than 1% of African citizens do. This is why Africans nations have to go begging to the West and China for aid and loans.

Another way to compare is to look at what Westerners and Africans earn for doing exactly the same jobs. This list shows how much a year they earn in England. Fill in what the same jobs pay in your nation. The difference will shock you! 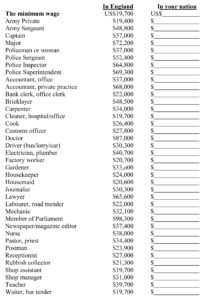 What this tells us is that the very least any Westerner can earn is almost 11 times more than 91% of you earn, and 28 times more than 43% of you (or over 70% of Zimbabweans).

I said at the start of this article that there is no intrinsic reason for the huge difference in living standards between Africans, and Westerners. And there isn’t.

But if you go about things in totally the wrong way, you will get the wrong result. And that is exactly what both the West and African governments have done in Africa.

Had they gone about achieving what most Africans really want – not poverty eradication but a Western-quality standard of living – in the way they should have done, we would be looking at a very different Africa today.

How can I possibly say that? It’s simple really. Everyone keeps telling us that the reasons for poverty in Africa are extremely complex. The UN, the World Bank, the IMF, Western NGOs, your own governments, even activists and campaigners, all say the same thing. Academics and economists (both Western and African) are the worst culprits because they are supposed to be the people with the knowledge and training to come up with the right answers. Instead, they are largely responsible for the complications and confusion surrounding poverty eradication, and for the disastrous policies that have been followed.

So what is the solution to that? There is only one: we all have to concentrate on building a business base in each African country that will pay you all enough to afford a Western-quality lifestyle. It’s simple, isn’t it? Which of course means we must search out and deal with anything that is getting in the way of that.

What would have happened if, immediately from the end of colonialism, both the West and your own governments had focused entirely on creating that business-base for you? You would be living a very different life today, wouldn’t you!

You may think the gap in living standards between you and Westerners is so wide that it will be impossible to close it, so what’s the point of even trying? That is not true. If everyone focused on helping your nation to build a business-base that will pay you as well as Westerners – which of course also means focusing on getting rid of anything that gets in the way (such as bad governments like Mugabe’s) – you will be staggered at how quickly that gap closes. Seriously, it really will not be difficult if the will of everyone is there.

Instead, the UN, the World Bank and the IMF have absolutely no plans to help you create such a business-base. Worse than that, no African government has either.

In fact, there is only one organisation that does, and that is your own AU with its Agenda 2063. This gives a very detailed plan for everyone to follow to achieve what we have been discussing. So what I cannot understand is this: why haven’t all African activists and campaigners latched onto Agenda 2063, and why aren’t they all promoting it as hard as they can?

Instead, I cannot find one doing that in the whole of Africa.

The real message is this: neither the West nor your governments will take you out of poverty and into affluence. So if that’s what you want, you will need to get it done yourselves, just as all Western citizens had to do to take themselves from poverty into the wealthy lifestyle they have today.