Zimbabwe President Robert Mugabe has said that people who murdered white farmers during a government-sanctioned purge in the 2000s will never be prosecuted. 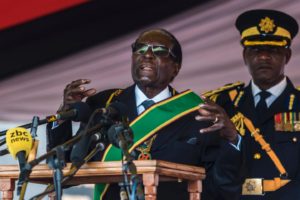 The 93-year-old president addressed a rally in Harare on Monday to mark Heroes’ Day, which commemorates soldiers who have fought for the country, particularly in its independence war against British colonizers.

Zimbabwe implemented a controversial land reform program in 2000 that saw squatters invade and seize hundreds of white-owned farms around the country. The violent seizures resulted in the murder of several white farmers, with many more displaced, and close associates of Mugabe given large chunks of land.

“Yes, we have those who were killed when they resisted. We will never prosecute those who killed them. I ask, why should we arrest them?” Mugabe said, according to Zimbabwean news site NewsDay.

The land reform program led to Western donors cutting aid to Zimbabwe and imposing sanctions on many in the government, including Mugabe himself, who remains under EU and U.S. sanctions. The program is also seen as contributing to Zimbabwe’s economic crisis, as in many cases those who were given land were not as productive as the preivous owners.

Zimbabwe verged on economic collapse in the late 2000s after a period of massive hyperinflation rendered its currency worthless. At present, the country is again facing economic turmoil, with high unemployment and a shortage of foreign exchange that has led the reserve bank to print a pseudo-currency, bond notes, raising fears of another round of hyperinflation.

But the land reform program has benefited many black families. Prior to the redistribution of land, there were fewer than 2,000 tobacco farmers in Zimbabwe, the most lucrative type of farming; in 2012, there were 60,000 farmers—the majority black with small plots of land—growing tobacco in Zimbabwe, the New York Times reported.

Mugabe’s government has taken further steps to reduce white influence in Zimbabwe. The government introduced an indigenization law in 2010 that required foreign-owned companies to sell a majority stake to local black Zimbabweans, though it has not been widely implemented.

The president has also spoken out against white residents of Zimbabwe owning land. “We say no to whites owning our land, and they should go,” Mugabe told supporters in 2014. “They can own companies and apartments…but not the soil.”

Earlier in 2017, Mugabe said he was aware of 73 white commercial farmers still operating in the northeast province of Mashonaland East. “We are going to take those farms and re-distribute them to our youths,” said Mugabe at a rally in April, speaking in the local Shona language, News 24 reported.

Mugabe has been in power in Zimbabwe since the end of the country’s war of independence in 1980 and is the world’s oldest non-royal head of state. The governing ZANU-PF coalition has put him forward as its candidate in the 2018 elections, meaning that Mugabe would remain in power until at least the age of 99 if he won the vote and survived the duration of another term in office.