HARARE-Journalism continues to be a hazardous profession in Zimbabwe, as members of the Zimbabwe Republic Police (ZRP) resort to violence to stop scribes from doing their job.Zimbabwe Lawyers for Human Rights (ZLHR) on 27 July deployed lawyers to offer emergency legal services to NewsDay journalists Obey Manayiti, Shepherd Tozvireva and Abigail Matsikidze and their driver Raphael Phiri after they were attacked and detained by police. 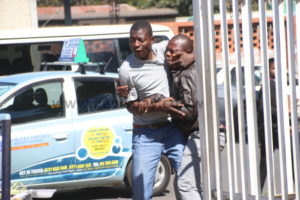 The four were detained at Harare Central Police Station after they were taken in while covering a standoff between members of the public and some spike wielding Zimbabwe Republic Police members in the capital. Manayiti and Tozvireva sustained some injuries following the assault. Civil society organisations condemned the police actions.“Journalism is not a crime, and the country’s constitution recognises this by explicitly guaranteeing media freedom,” said  MISA Zimbabwe.

“MISA Zimbabwe therefore calls on Home Affairs Minister and his police chiefs to urgently act on this unacceptable policing so as to stem such unprofessional conduct feeding off a culture of impunity enjoyed by members of the force. “Failure to do so will completely erode the police’s public standing as a reputable force that upheld the rule of law in protecting citizens,” said MISA.The Voluntary Media Council of Zimbabwe (VMCZ) expressed concern that journalists continued to face harassment from State security agents.

“The VMCZ, strongly believes in an ethical, accountable and professional media and these three important tenets cannot be achieved if the media continue to operate under threat and constant fear of possible attacks by the police or any members of society.”

The journalists were going about their professional business when a group of ZRP members pounced, accusing them of taking pictures in the central business district.Some of the officers jumped into the Newsday vehicle, grabbed the journalists and assaulted them before charging them with assault. Manayiti, who is represented by Kuzivakwashe Ngodza of ZLHR, has laid criminal charges against the cops who assaulted him. Journalists covering events such as peaceful protests have often come under attack from the police, with some losing equipment such as laptops, cameras and recorders.