Panties or not, it seems popular dancer Zodwa Wabantu will not be performing in Zimbabwe. 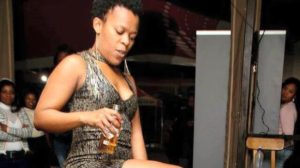 On Tuesday, the Zimbabwean acting minister of Tourism and Hospitality Patrick Zhuwao ruled that the Durbanite, famous for her sultry moves and revealing clothes, will not be allowed to perform at the Harare International Carnival.

This happened after actress Anne Nhira complained to the tourism board that Wabantu should not be invited because she was not a Zimbabwean, she dressed scantily and she was a lesbian.

In a letter to Nhira, Zhuwao stated: “The government position is that the artist concerned, Zodwa Wabantu, may not participate at the Harare International Carnival. In this regard, relevant authorities have been notified.”

Speaking to The Star yesterday, Nhira said: “This is an international event to promote the image of Zimbabwe. She is not Zimbabwean, and if we want dancers to perform at the event, there are local dancers who can do it.

“We don’t want a person who will tarnish our image as a country. She does her entertainment half-naked and she has publicly acknowledged that she is a lesbian.”

There were reports that Wabantu, whose real name is Zodwa Libram, is lesbian but she has dismissed them.

Same-sex relations are illegal in Zimbabwe, where gays and lesbians feel persecuted and their rights are undermined.

The Zimbabwean government does not approve of them.

Yesterday, Wabantu said she was unaware that she was not welcome in Zimbabwe anymore. “They contacted me today to organise the plane ticket bookings. I know nothing about this.”

She said she would confirm with the tourism authority today and give them a piece of her mind.

“I have performed in the country before, so what is the problem now?”