The year 2008 was the zenith of shortages of basic commodities. Hyperinflation reached levels that had only been seen during Europe’s Great Depression. After a decade of hyperinflation, Zimbabwe learned from its mistakes and switched to a more stable United States dollar economy. 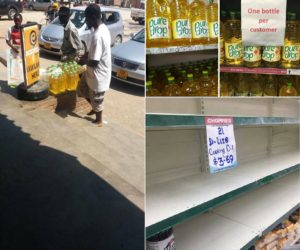 Human rights award winning activist, Linda Masarira, has this morning been on the streets, monitoring the situation in Harare where the frightening specter of 2008 has returned.

Waking up from a bad dream?

This morning I woke up in a frenzied panic. No! It was not because I had a nightmare. It is because I woke up thinking of that which had kept me up till way after midnight: how am I going to survive living in Zimbabwe with all that is happening?

I woke up with these and more questions in my mind.

I now officially describe myself as a terrorised human being – which is ironic considering that 21 September was World Peace Day. I would like to believe that a lot of you reading this are as terrorised as I am.

Burning currency – the trade of dealing in forex, which we saw between 2000 and 2008 – might work for the lucky few but it won’t be a sustainable.

And emigrating, mmmmm, for those who can yes, but do we have another place to call home save for Zimbabwe?

We need to put an end to this terror!

We are all aware that life is not easy, but surely it is not meant to be this hard!!

Have you seen the new prices for lotion? You pay US$18 for a bottle of lotion which is R48 (US$4) in South Africa This calls for action Cdes. Zvatotanga so – the chaos has begun. Things fall apart. There are two things here its either we rise up now in our numbers and protest or we keep quiet and continue to suffer.

The frightening price of lotion (in American dollars)

Zimbabwe down a greasy slope

There are fuel queues all over Harare today – does that sound familiar? I have just passed by Belgravia service station and there is a long winding queue at Zuva garage.

People are hoarding cooking oil. Some want to pretend that all is well in Zimbabwe. You can rig elections but you cannot rig the economy. We only have ourselves to blame for our hardships. It’s time we say NO to oppression and speak with one voice.

ZBCTV news at 8pm last night (22 September 2017)  reported that forex shortages push prices up. Stop telling yourself that voting won’t change anything. Voting will change everything. A two litre bottle of Pure Drop cooking oil is now going for $5, up from from $3.50.