Harare - First Lady Grace Mugabe on Friday made her first public speech in the wake of her alleged assault of South African model Gabriella Engels, but made no mention of the incident. 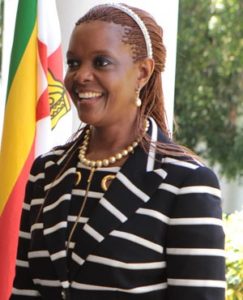 Instead, the First Lady condemned factionalism tearing the ruling Zanu-PF party apart, and insisted that God still wanted her husband to lead Zimbabwe.

“God still wants President Mugabe to lead and he will tell us when he wants to step down,” she said, in comments carried by the state-run Herald.

Grace Mugabe was speaking to thousands of ruling party supporters at a rally in the central city of Gweru.

Gweru and the surrounding Midlands province are a stronghold of Vice President Emmerson Mnangagwa, who is accused of leading a faction vying to succeed Mugabe.

In an apparent jibe at Mnangagwa, the first lady said: “You must be loved by all provinces not just one if you want to lead Zimbabwe.”

On Thursday Mnangagwa was forced to deny claims by supporters that he had been poisoned by some of Grace Mugabe‘s ice cream served at a previous rally in southern Zimbabwe on August 12.

At Friday’s rally officials announced that the First Lady had supplied $15 000 worth of ice cream and yoghurt for youths attending the rally.