Zimbabwe first lady denies assault on Gabriella Engels, saying she was protecting herself after being attacked with knife 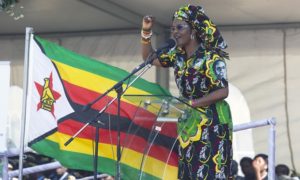 Grace Mugabe has countered the version of the incident given by Gabriella Engels to police and media. Photograph: Tsvangirayi Mukwazhi/AP

Zimbabwe’s first lady, Grace Mugabe, has denied assaulting a South African model in a hotel suite in Johannesburg last month, saying she acted in self-defence after being attacked with a knife.

In a previously unreported deposition from 17 August, Mugabe countered the version of the incident given by Gabriella Engels to police and media. According to Mugabe, she was protecting herself after intervening on behalf of her adult sons, Chatunga and Robert Jr, who were “in trouble with a drunken young woman”.

Engels alleges an irate Mugabe burst into the room in a luxury hotel where she was waiting with two friends to meet Chatunga Mugabe on 13 August and started beating her with an electric cable.

Photographs taken soon after the incident showed a gash to Engels’ forehead and head.

The incident reinforced Mugabe’s reputation for angry outbursts and focused attention on the lifestyle of Mugabe’s two sons, who live in the upscale Sandton area of the South African commercial capital.

South African media alleged this week that the two students had been handed a $60,000 bill for damages following their eviction from a penthouse apartment in Sandton after a brawl in July.

Mugabe is a contender to replace her ailing 93-year-old husband, in power for 37 years, as Zimbabwe’s president.

The alleged assault played badly at home in Zimbabwe, where it was picked up in detail by the media, which also reported on the first lady’s multimillion-dollar property portfolio in Johannesburg and the alleged extravagance of her two sons.

In her deposition, Mugabe dismissed Engels’ version as “malicious allegations” and said she had been attacked after going to help her sons.

“She was worried about them and went to see them at their hotel suite,” the statement said. “Upon her arrival, Ms Engels, who was intoxicated and unhinged, attacked Dr Grace Mugabe with a knife after she was asked to leave the hotel …Security was left with no other option but to remove Ms Engels from the hotel suite.”

The statement also alleged that Engels had been in a fight with other women at Johannesburg’s Taboo nightclub the previous evening and suggested that may have been the cause of her injuries.

Afriforum, a civil society group acting on behalf of Engels, denied both accusations, and accused Mugabe of “desperately trying to escape responsibility for her own violent behaviour by using lies to falsely portray the victim in this case as the perpetrator”.

“Gabriella never attacked Grace Mugabe in any way and she did not participate in the fight at Taboo,” Afriforum told Reuters news agency.

South Africa controversially granted Mugabe diplomatic immunity, allowing her to evade immediate prosecution for assault. Engels and Afriforum have challenged the legal basis of that decision, saying Mugabe was in South Africa not on official business but to seek medical treatment.

The decision to let Mugabe return home caused a row in South Africa, with the opposition Democratic Alliance also going to court to try to overturn the immunity.

Mugabe’s main rival in the race to succeed her ailing husband is the vice-president, Emmerson Mnangagwa, a veteran party official. Mnangagwa, 74, is the preferred choice of most western diplomats, has some public support and is thought to have the backing of the military.

Mugabe is a more flamboyant figure, once known for her lavish shopping trips, which angered many in the impoverished country. Recently she has become more involved in politics as the head of the Zanu-PF women’s wing, and has publicly called on her husband to name a successor.