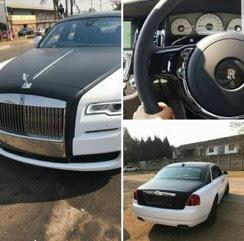 The arrival of the two Rolls Royce limousines imported by Grace Mugabe’s eldest son was celebrated with a huge party in Harare. Picture: Supplied

The two vehicles – valued at more then R70 million – were offloaded from the KLM airline at Harare International Airport. Their arrival sparked a huge celebration on Sunday night with French Champagne flowing among Goreraza and his Harare friends, all close to the first family.
Goreraza has told pals in Harare his next vehicle, due to arrive in the Zimbabwe capital shortly, is an Aston Martin.
Goreraza, born to Grace Mugabe when she was married to her first husband, Stanley Goreraza, has a fast living reputation. Like his two younger brothers, Robert Jnr, 25, and Chatunga, 21, sons of President Robert Mugabe, he has a chequered reputation and was previously found guilty of culpable homicide after he ran over and killed a pedestrian in central Harare.
He has had a chequered mining career but insiders in Harare say he ultimately lives off massive cash donations from his mother who is regularly paid out with public funds from the treasury and the Reserve Bank of Zimbabwe as well as her bank account at the Central Bank of Zimbabwe.
At present the Mugabe family, excluding Robert, are in New York at the UN General Assembly along with about 70 cabinet ministers and senior officials at a cost – according to government sources – of about R130 million. This expenditure comes when Zimbabwe is failing to pay several debts it owes to various South African government departments and State-owned enterprises.
Goreraza was refused a visa by the US, but did not answer three of his Zimbabwe telephone numbers on Monday.
Airline officials in Harare, say they suspected that the Rolls Royce’s were bought in Europe.
Grace Mugabe’s lawyers from the Zimbabwe Embassy are expected to show up at the Pretoria High Court on Tuesday in connection with charges that she beat up and injured a 20-year-old Johannesburg woman at her two younger sons rented apartments last month. The woman, Gabriella Engels claims Mugabe beat her and two of her friends with an extension chord. She was treated in hospital the same night and made full statement to the police.
The South African government, apparently reluctantly, granted Grace Mugabe diplomatic immunity so she could leave the country before facing charges.
Afriforum lawyer, Willie Spies, acting for Engels, said there would be “preliminary interlocutory proceedings” in the Pretoria High Court on Tuesday and said indications were that lawyers for the Zimbabwe Embassy may submit an intervention on behalf of Zimbabwe’s first lady.
With fees released by the Reserve Bank of Zimbabwe in May, Grace Mugabe recently spent about R48 million on a property and various fees in Sandhurst, Johannesburg, as a “bolt hole” for when her husband dies.
Goreraza is the signatory on this deal.
Included in her spending in Sandhurst is another massive property she rents for herself and her two younger sons, but well placed sources in Sandton said on Monday the two young men have also set up another flat in the building from where they were evicted last month after their mother’s alleged attack against Engels.
The frequent various night clubs in Sandton, in particular, Taboo, where officials say they are big spenders.
Robert Jnr is studying at University of Johannesburg. Chatunga has so far not managed to secure any educational qualifications.
Post published in: Featured