I met her on Facebook – our mutual love for literature and Zimbabwe drew us together like a magnet and nails. The nail comparison is hardly accidental; I have come to know that she is as tough as nails. 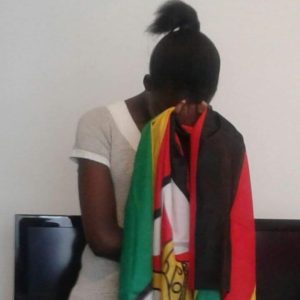 When your country makes you weep

In her young life, my friend Tait has endured loss beyond the human imagination. But is loss not synonymous with our Zimbabwe?

Does anything make sense in Zimbabwe?

To be honest, she was just another face and name on my long list of Facebook friends. It all changed on the day that I came upon her photograph, before the mindboggling ban of the national flag. Yes, yes, I know, it doesn’t make sense that there is a ban on the very thing that identifies us as Zimbabweans. But this is Zimbabwe, a place where nothing makes sense: with all the dams at hundred percent capacity, our kitchen taps are as parched as the Sahara, a mini skirted South African dancer has been barred from performing in a country that idolizes another woman whose signature dance move involves fornicating with a beer bottle, nudity was the national dress before white people arrived, the President assures us that he is still the right man to lead the country when he has slept through his entire term which began 2013, our leaders send their children to universities abroad and seek treatment in Singapore, India and Malaysia, although they will tell you that everything is well in the country’s suture-less, drugless and latex gloveless hospitals, monopoly money is equal to the almighty American dollar, our traffic police, without shame, extort motorists in the name of road safety but the state of the roads is the real cause of death, the first lady is the actual President and the Junta her backers. But back to #ThisFlag of ours.

In the photograph that caused my heart to shed a tear, Tait holds the Zimbabwe flag to her face. Just that single photograph tells the sad story of Zimbabwe. When I learned her personal story, it was easy to see why she took that picture.

Despite the loss of both parents, Tait the bookworm graduated from University of Cape Town with a bachelor of social sciences in international relations and English language and literature. The incompetence of the medical staff in attendance had, 8 years earlier, resulted in motor neuron impairment to her beloved child.

After graduating from uni, she stayed on in South Africa where she held a job – something that many young Zimbos have never tasted. But the discomfort of always being viewed as “a foreigner” combined with her love for her homeland, Tait said her goodbyes to the country that had given her an education and a job. Coming home should be a happy moment, but not if your home is a dysfunctional state such as Zimbabwe. It’s easy to see why anyone might want to weep into the flag.
Going back to Zimbabwe meant facing the same health system that irreparably changed the course of her daughter’s life. Returning home meant improvisation for the mother of a child with a disability in a country where disability matters are on the periphery of the national agenda. Going back to Zimbabwe meant elbowing other young Zimbos out of the way in the race to find a job, which is not easy when 90% are jobless. Going to Zimbabwe meant that her online activism was now real, with the tangible threat of disappearance, torture and even death.

Zimbabwe is no walk in the park

If those were her fears, they were not so imaginary, as most fears are. Upon return to her country, it became clear that life would be no walk in the park; she was beaten by the police while peacefully demonstrating in the park – Africa Unity Square. Today she turns 28. Seventeen years ago, 28 year olds had houses, cars, 3 kids and a dog. To Tait, and many people her age, these dreams are an illusion. I can relate to this. My father put my siblings and I through school – descent schools – on a government paycheque. I would not be able to afford to pay school fees for one child at Prince Edward or Eveline Girls High, unless I peddled my kidney.

Happy birthday Tait and may you find wisdom and, most of all, a Zimbabwe that doesn’t make you weep.