A book about the Vigil, titled ‘Zimbabwe Emergency’, was launched today – appropriately on a Thames boat trip after the Vigil. We cruised past London landmarks lit up in a kaleidoscope of colour from Lambeth Palace, the Houses of Parliament and the London Eye on to St Paul’s Cathedral, the Globe Theatre and the Tower of London to the skyscrapers of the new financial centre in the east of the city. 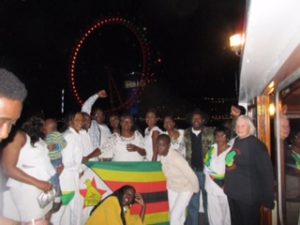 The boat trip, accompanied by Zimbabwean food, was to raise money for the Zimbabwe Peace Actors’ Platform (ZimPAP) with which our sister organization the Restoration of Human Rights in Zimbabwe is involved. ZimPAP wants to train civilian peacekeepers to educate rural people on their constitutional rights and overcome fear and intimidation ahead of the 2018 elections.

The 300-page illustrated book is based on the Vigil’s weekly diaries which have recorded how events affecting Zimbabwe have unfolded as seen by the diaspora in the UK. It chronicles the violence, economic disintegration and political manoeuvring over over the fifteen years since the Vigil was started. The book costs £10 and is available from the Vigil. Arrangements are being made to also sell it via Amazon. All proceeds will go to finance the Vigil’s work in Zimbabwe.

The publication of the Vigil book is timely because Zimbabwe appears to be experiencing once again the emergency of 2008, when hyper-inflation emptied the shops and Zanu PF was forced to form a government of national unity withy the MDC. The Vigil is getting reports al the time from family and friends at home about the increasingly desperate position (see: http://www.zimvigil.co.uk/vigil-news/campaign-news/889-looming-financial-meltdown-in-zimbabwe-).

While people face desperate privation in Zimbabwe, Grace Mugabe’s eldest son Russell Goreraza threw a champagne party in Harare to celebrate the arrival of two custom-made Rolls-Royces said to cost $5 million. He says his fleet is to be augmented soon by an Aston Martin.

Russell obviously took the opportunity to splurge out while Grace Mugabe was away shopping in New York and President Mugabe was sleeping through Trump’s speech to the General Assembly, which he went on to condemn in his own speech when briefly awake before staggering off the podium.

FOR THE RECORD: 34 signed the register.