Harare - President Robert Mugabe says whites came to Zimbabwe and wanted to make it their own, ignoring the fact that "what is not yours will never be yours". 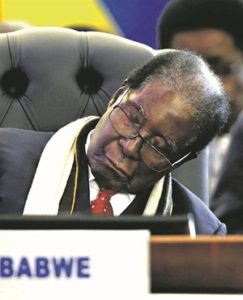 The 93-year-old president was speaking at a state funeral on Thursday at which he hailed the resistance fight by the likes of former vice president Joseph Msika against white minority rule.

“If you come to my place and claim it’s yours, I will fight you. In the same vein, this is what the likes of Joseph Msika resisted,” Mugabe said at the funeral of Msika’s widow, 89-year-old Maria Msika.

“Whites came to Zimbabwe and wanted to make it theirs oblivious of the fact that what is not yours will never be yours no matter how much you fight for it,” the state-run Herald quoted the president as saying in his speech at Harare’s National Heroes Acre.

Mugabe launched a sometimes violent land reform programme to seize farms from white landowners in 2000. Out of around 4 000 on the land then, only a few hundred remain.

At a series of countrywide rallies held since June, the youth wing of his Zanu-PF party has been urging the ageing leader to seize remaining white-owned farms to redistribute to young party members.