Harare - Zimbabwe's First Family has been slapped with a bill of R780 000 to repair a luxury Sandton apartment that had been rented by President Robert Mugabe's two sons, reports said on Friday. 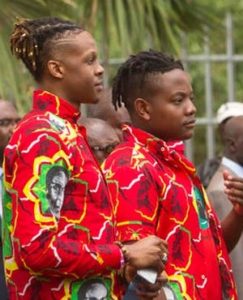 Robert Junior and Bellarmine Chatunga were reportedly evicted from The Regent Apartment Hotel in June for their “unacceptable behaviour“. They later moved to another hotel, where First Lady Grace Mugabe is alleged to have attacked model Gabriella Engels in August.

The Zimbabwe Independent says that the two boys were slapped with a bill from The Regent after they “destroyed property and stained carpets” during their stay there.

Quoting unnamed sources, the paper said: “The Regent MCC manager has written to the First Family informing them that R780000 is needed to repair the apartment.”

In July, the Zimbabwe Independent reported that the two boys had upset other guests at the hotel with their noise and incessant partying, and that things had come to a head after a violent brawl in the hotel’s entrance.

In early July, Grace was reported to have made an “emergency trip” to South Africa to find them alternative accommodation.

The First Lady was back in South Africa in August, which is when she allegedly assaulted Engels after she found the model in her sons’ new quarters at Sandton’s Capital 20 West.

Photographs leaked to the South African media showed that some damage was caused inside that apartment during the alleged assault.