He made a brief appearance at the magistrate's court for the UZ Demo trial before heading to the High Court for continuation of the Subversion trial. 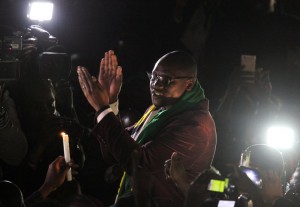 The state brought before Justice Chigumba 3 witnesses and also played 4 videos as exhibit A. The defense lawyer Harrison Nkomo  cross examined the 3 state witnesses who are all top ranking police officers with a combined experience of 80 years in the ZRP (heavy weights you would think

) what a joke! below are some of the interesting remarks they made during cross examination. Poor guys, Harrison was savage today, kuzvuzvurudza varume  vakuru mutara!
State Witness: “the accused  started his church to brainwash them and create a terrorist organisation similar to Boko Haram”
State Witness: “Maybe the accused was touching his ear or using some password so people knew he meant violence when he said no violence”
State Witness: “When the accused Pastor Evan said ‘no to violence’ he was using a password to incite violence”
when asked to name one follower of the accused the state witness responded “Promise Mkwananzi”
It was shocking at the same time embarrassing that senior police officers could not interpret the simple message in the 4 videos. The state’s case is very weak and it is in actual fact a joke in my opinion. It is rather unfortunate that these court proceedings are not televised otherwise the whole world would surely laugh at us for putting such a joke of a case before such a Honourable court as the High Court.
#ThisFlag #FreePastorEvan #TinoVhotaChete #Election2018 #ZimbabweDecides2018
Post published in: Featured