London - Tawananyasha Widows and Orphans Christian Organisation (TWOCO) U.K under the umbrella of, Women Of Justice Arise (WOJA) marched from the Zimbabwe embassy-London-to number 10 Downing Street to Hand in a petition to Lord Ahmad (Prime ministers Special Representative on Sexual Violence in conflict) requesting the British Government to intervene on political violence against women in Zimbabwe. 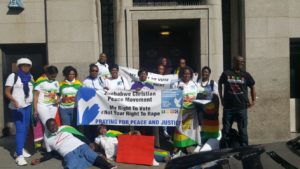 The petition was presented by Deborah Jandles Founder of TWOCO and Women of Justice Arise and leaders of WOJA, Beverly Mutandiro,Lean Jean Mushuku, and Nicolatte Shungu Gwati.
TWOCO is a registered charity in England and Wales which supports widows and orphans in Zimbabwe and is under the umbrella of WOJA.
The group met at the Zimbabwean embassy in London for a peaceful demonstration to raise awareness of political violence as the country approaches the 2018 general election before marching to number 10 Downing Street.
The Christian group was joined by human rights organisations which include Zimbabwe Christian Peace Movement (ZCPM), Female Victims of Torture Arise (FEVTA), Restoration of Human rights (ROHR), and MaZimbabwe Yes We Can (MZYWC) which are also advocating for equal political rights.
The petition- MY RIGHT TO VOTE/NOT YOUR RIGHT TO RAPE- has a sole aim of highlighting all forms of politically motivated sexual violence against women in Zimbabwe.
The group has also written to all Southern Africans Development Community (SADC) member states requesting that they exercise their constitutional mandate as signatories to address the recurring ugly scenes of violence already manifesting across Zimbabwe ahead of the elections.
This petition marks the start of an organised campaign by Zimbabwean diaspora Christian women against political violence on women and girls at home.
It was organised and signed exclusively by women, and therefore demonstrated clearly for the first time that Christian diaspora women are in solidarity with the women victims of political violence at home.
Earlier this year MDC activist Masciline Chikosha was sexually assaulted by suspected Zanu Pf thugs in Bindura for wearing an MDC T Shirt but no arrests were made despite,the identity of the perpetrators being known.
Meanwhile, Zimbabwe civil society organisations have been intensifying the call for the diaspora right to vote in the 2018 general elections.
Zimbabwean Diaspora are being prevented from exercising their right to vote on this major 2018 political decision that is more likely to affect their lives as well as that of their families back home.
Zimbabwe is one of the few repressed countries that disenfranchises their own diaspora citizens from voting. Whilst the 2013 constitution allows diasporas to exercise their right to vote, it is up to the sitting government to align the law.
Post published in: Featured