No sooner had Vice-President Mnangagwa returned from emergency surgery in South Africa for poisoning than Grace Mugabe announced that the President himself had been afflicted. 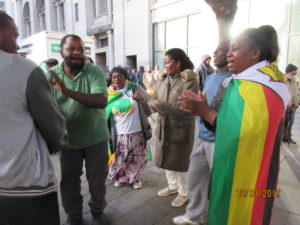 Giving, if anything, too much information, she said her husband had been laid low with diarrhoea by food poisoning and had been unable to rise from his bed for two weeks.

Mugabe had apparently felt so close to death that he had summoned Defence Minister Sydney Sekeramayi, who is not only tipped to succeed him but is also apparently a trained doctor so he must have been useful with bedpans etc . . . (See: http://nehandaradio.com/2017/09/11/mugabe-diarrhoea-two-weeks-grace/.)

The Vigil doubts that our Marxist President will ever get over the Trots. He is set in his ways. But his flight to New York accompanied by an entourage of 70 stinks enough anyway, with every member of the delegation getting an allowance of $1,500 a day for their 10 day trip to the 5 day UN summit.

Most of the Mugabe family is going on the jaunt. But whether the President’s toddler grandson Simbanashe also qualifies for $1,500 a day to change his nappies is open to question.

Appropriately, the UN meeting is devoted to sustainable development of which Zimbabwe of course is a model. The world observes in wonder how Zimbabweans survive with no development whatsoever, sustainable or not, and everyone will listen open-mouthed as Mugabe defends North Korea against unprovoked US aggression (see: https://www.theindependent.co.zw/2017/09/08/president-take-bloated-entourage-un-summit/).

Of course, it is possible that they are open-mouthed because they are being sick at the hypocrisy of a geriatric who talks crap about Zimbabwe’s economy rebounding when it is clearly going down the loo.

While the Mugabe mafia milks millions of dollars in hard currency on their New York shopping spree, Zimbabwean companies are being driven out of business because of their inability to get foreign exchange to pay for essential imports. It seems as if the sh*t has hit the fan and the stench is overwhelming the country (see: https://www.newsday.co.zw/2017/09/foreign-suppliers-turn-screws-zim-companies/ and http://www.insiderzim.com/bad-news-for-zimbabwe-the-scary-side-of-the-zimbabwe-stock-exchange-bull-run/).