Harare - Zimbabwe's home affairs minister on Sunday threatened "renegades and malcontents" who he accused of spreading alarm and despondency by claiming there are shortages. 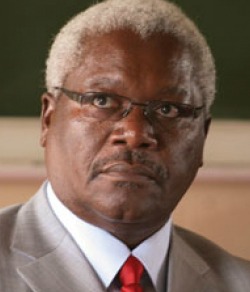 In a chilling threat, Ignatius Chombo said that the government was monitoring the press and social media “to deal a telling blow to the perpetrators of the crime.”

Chombo said claims that Zimbabwe has now “slipped back to the hyperinflationary days of 2008” were propaganda – and that criminal charges could be brought against those who make them.

“Of grave concern to the ministry is that these reports have all the trappings of a politically co-ordinated criminal agenda by some well-known renegades and malcontents who now seek to disturb the peace in the country to cause alarm and despondency in pursuit of an illegal political game,” he said in a statement issued on Sunday evening.

Chombo’s warning came after the arrest of protest pastor Evan Mawarire on Sunday morning. The ThisFlag leader hosted a live chat forum on Facebook on Saturday during which he criticised the government’s handling of the economy. He was charged with subverting the government for making the broadcast, ThisFlag said.

President Robert Mugabe‘s government denies there is a problem. Central bank chief John Mangudya issued statements at the weekend assuring Zimbabweans that enough foreign currency is being allocated for the import of basic and essential goods, including fuel and power.

At the weekend, fuel queues emerged at service stations and there were reports of shoppers buying up stocks of basic commodities in anticipation of shortages last seen in the 2007-2008 crisis.

Some Zimbabweans were quick to dismiss Chombo’s words.

Writing on Twitter, former education minister David Coltart said: “This statement reveals just how delusional the ruining party has become – they don’t appear to notice the economic chaos all around them.”

Said Zimbabwean @MsFazy: “With all due disrespect he (Chombo) can jump off a cliff.”