Brian White, 21, faces losing place at Lady Margaret Hall due to uncertainty around his immigration status 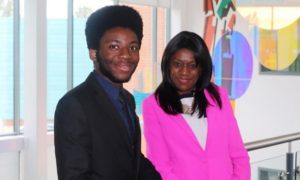 White with his local MP, Eleanor Smith, who has backed the #GetBrianToOxford campaign on social media. Photograph: Luke Wilcox/PA

A student who faces losing his place at Oxford University due to uncertainty over his immigration status has told the Guardian he does not know what he would do if deported to Zimbabwe, where he was adopted as an orphan by a British family.

Brian White, 21, was abandoned as a baby and lived in an orphanage in Zimbabwe until he was six. He was fostered and later adopted by a British man, Peter White, and his family, who moved to Botswana and later returned to the UK.

He said he did not think he had been treated unfairly by the Home Office but that there were “flaws in the system”.

“I’m not legally allowed to work, so I assume I would be deported to Africa,” Brian White told the Guardian. “I don’t know what I would do. I don’t know anyone there. I’d have to start again. This is the most important thing to me right now. Everyone I know and love lives here.

“I worked really hard to get into Oxford. I spent loads of time revising, and I got the grades in the end. I was really ecstatic,” he said. “When I realised I couldn’t actually go because I couldn’t afford it as I wasn’t a home student I was hugely disappointed.”

White joined his adoptive family in Wolverhampton as a teenager and was given permission to enter the UK. But in 2014, his application to become a British citizen by naturalisation was rejected and he was granted limited leave to remain rather than indefinite leave.

A campaign launched by friends of White, urging the Home Office to review his case, has attracted more than 80,000 supporters. They include the author Philip Pullman, the comedian Frankie Boyle, and the MP for Wolverhampton South West, Eleanor Smith, who have backed him on social media using the hashtag #GetBrianToOxford.

The petition states: “[Brian] should have been granted indefinite leave to remain by the Home Office, but instead was given limited leave to remain. Brian’s current difficulties stem from the handling of this decision. This only came to light as an issue when Brian’s application to become a British citizen by naturalisation was rejected, leaving any potential university applications in doubt.”

Despite the original rejection, White carried on with his studies, taking his GCSEs and A-levels at Highfields school in Wolverhampton. He received four A*s at A-level but was unable to take up his place at Oxford last year because he was not eligible for student finance.

The university deferred his place for a year, and his secondary school let him return and work as a volunteer teaching assistant. In April 2017 he submitted a further application for leave to remain, which is pending. But his supporters say he is up against the clock as his place to study chemistry at Lady Margaret Hall is due to expire.