May you allow me to share a few sentiments about the MDC l know led by President Richard Morgen Tsvangirai which was formed on 26th February 1999 to challenge ZANU-PF politically. Since then it has been carrying on the struggle of the people for food and jobs; peace; dignity, decency and democracy, equal distribution of resources and justice, transparency and equality of all Zimbabweans. 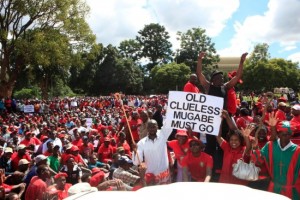 MDC-T is a democratic party that values the legitimacy that comes from the people’s involvement through democratic process of elections. It believes in the electoral process which defines the main characteristic of this political party and is being invested in the belief that any government formed in Zimbabwe must be a legitimate government that comes into being from elections in line with the country’s constitution.

The MDC I know is there to rescue Zimbabweans from their current predicament resulting from the crisis of legitimacy. The President, Morgan Tsvangirai, has time and again placed a far much higher premium on legitimacy and democracy.

As it is, the MDC I know, has established a functional Alliance with several other political parties and groups that have a genuine desire to rescue Zimbabwe from its current abyss in pursuit for a free, fair and credible election earmarked for 2018. This Alliance is a decision of the national council in support of the genuine desire by the people of Zimbabwe to see a broad alliance of a diverse Zimbabweans coming together to contest the forthcoming elections as a united front.

I have also noted the following points, though not exhaustive, about the MDC I know which I believe can also be appreciated by many Zimbabweans:-

Allows Zimbabwean people who are keen to express themselves in a free, fair, and credible election.
Join the millions of exasperated Zimbabweans in expressing utter shock and complete disappointment to declare Robert Mugabe’s birthday as an official public holidays starting from next year.
Made ward based  campaigns and learnt that the opinion leaders’ sentiments that they yearn for a truly free and fair election where the people’s will is respected and transfer of power guaranteed
Condemned Grace Mugabe’s criminal conduct in South Africa as a gross and unmitigated diplomatic scandal.
Welcomes the ruling of the Kenya Supreme Court which declared President Uhuru Kenyatta’s election (8/8/2017) win invalid due to irregularities committed by the election board and ordered a new election within 60 days.

Has urged ZEC to ensure that all eligible Zimbabweans are registered to vote.
Activated an  ant-rigging unit to deliberate on strategic electoral matters.
Believes in an inclusive democracy based on the understanding that persons with disabilities are part and parcel of the broader community and have a lot to contribute to our democracy.
The party has an outstanding aversion to violence and that it will continue to take stern and decisive action on anyone implicated in violence within the party.

Calls upon SADC to do whatever is within its power to ensure that the next year’s 2018 elections in Zimbabwe be held in a free and fair environment that will guarantee a credible outcome.
My mind is also very clear on the efforts made by the MDC I know in trying to make life very easy for everyone in Zimbabwe when they were in the Government of National Unity (GNU) which brought about economic successes by introducing multi-currency system. This witnessed the resurrection of many defunct services.

It also brought order and sanity to the state as evidenced by the sentiments from the general populace who welcomed it with a sigh of relief.

President Morgan Tsvangirai is a social democrat who does not believe that a country can thrive on ethnicity. He believes in rights of all citizen, a nation where every person regardless of gender, colour, race, ethnicity and creed is able to participate equally without prejudice.

I find myself in no doubt that if we all rally behind the MDC I know to vote it in power for 2018 we are all going to benefit. Please let us think seriously about the MDC I know for our better future in Zimbabwe.