Staff at the Zimbabwe embassy in London had to run for cover after a group of Zimbabwean protesters stormed the embassy demanding that "Mugabe must go". 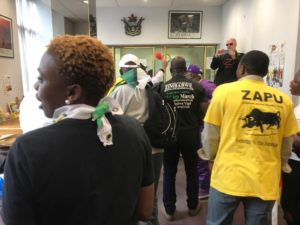 The invasion took place on Wednesday 27th September at 1100am. Once inside the angry protesters pulled down president Robert Mugabe’s portraits and  broke into song and dance with some dancing on top of the benches, shouting “Mugabe must go”

The campaign – LET’S DO SOMETHING ABOUT IT- which was organised by Zimbabwe Human Rights Organisation (ZHRO) was joined by Restoration Of Human Rights Zimbabwe (RHOR Zimbabwe), MDC, ZAPU, Mazimbwe Yes We Can (MZYWC), and Coventry Asylum Seekers And Refugee Action Group (CARAG).

The frightened staff were nowhere to be seen in just a matter of minutes.

The metropolitan police had to be called in by the embassy staff after the protesters brought Charing Cross to a standstill. Traffic into strand was halted as 4 police vehicles and 2 motorbikes that included the rapid response unit moved in.

“The ZANU PF regime would have responded with water canons, pungent spray which burn eyes and skin, buttons and even attack dogs” said one protester.

“Such manifest of intolerance is what drives us to be defiant and do whatever it takes to have our voices heard from abroad. This is not the end of it, we are coming back every Wednesday to shut down the embassy!” She shouted.

The protesters were also angered by arrest of Pastors Evan Mawarire who has been accused of subverting the government.

The subversion charges came as a result of posting a video on Facebook criticising the government’s handling of the economic crisis.

Pastor Evan has awakened the spirit of resistance and inspired many to vent their frustrations and anxieties over the ongoing economic crisis, human rights abuses,and corruption.

The on-going electoral fraud of trying to dissuade opposition supporters from voting by slowing the registration process is likely to intensify the people’s existing resentment toward the ZANU PF regime.

This is another important focal point around which to organise demonstrations. ZANU PF’s strong arm tactic may be sufficient to prevent an electoral loss, but democracy protests are likely to rise as there are signs that 2018 elections will not be fully democratic.

There will be more demonstrations to shut down the Zimbabwean embassy in London disrupting business as usual.