New York – Zimbabwean President Robert Mugabe on Thursday further exposed his frailty at the United Nations General Assembly (UNGA) where he staggered off the conference room after giving his speech at the 72nd session of the world body. 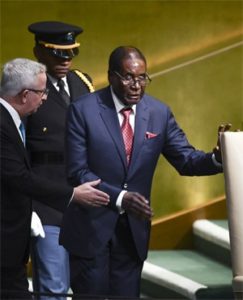 This came only two days after he was shown by international channels sleeping most of the time at the gathering of world leaders when President Donald Trump was giving his first address at the UNGA since his election into office last year.

The 93- year-old leader, who took to the podium with speed, found the going tough as he stepped down from the podium and got the assistance of aides to walk him out of the conference room. Television visuals showed Mugabe being held on one hand while his other hand sought balance from a wall as he staggered off the conference of the UNGA.

Most Zimbabweans who watched Mugabe’s address at the United Nations said it was high time the nonagenarian stepped down to pave way for fresh blood.

“We should hang our heads in shame. As Zimbabweans we have failed to retire this old man. We also allow this old man to parade himself on world stage giving stale speeches to an ignoring world. The man should be in an old people’s home,” said Mafume.

Zimbabwe National Students Union secretary general Makomborero Haruzivishe concurred with Mafume, saying  Mugabe was an embarrassment to Zimbabwe adding that Zimbabweans were now appearing like people who could find a replacement for Mugabe.

“It is a clarion call for us Zimbabweans to rise up and save our nation and future which is now in [a] staggering mode for it is all clear that he (Mugabe) is staggering with whole nation to his grave,” said the student leader.