As Harare’s water woes continue, the Harare City Council has moved in to support efforts aimed at preserving wetlands which are the major source of water for Harare. 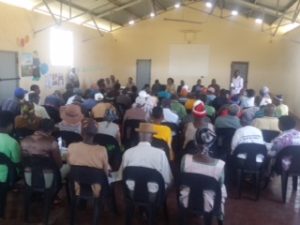 “Protecting wetlands basically means we are protecting our sources of water and this is very critical because water is life. It is thus critical to ensure that efforts are made at community as well as various levels to protect our water sources,” said Mabika

The Harare Wetlands Trust has mobilized residents of Rugare as well as other suburbs in Harare to be part of Local Environmental Action Plans (LEAPs) which are local plans developed for the management of the environment.

Mabika said LEAPs were critical to wetlands’ survival as they act as a tool for monitoring and controlling activities at wetlands.

‘We are expecting that the LEAP programmes will spread to all the wards of Harare. Preserving wetlands will allow us to provide adequate water for our residents. LEAPs help us monitor and control activities that might lead to wetlands destruction. Knowledge dissemination is critical as well,” said Mabika.

Of late, wetlands have been under threat in Harare due to a number of factors that include residential and industrial expansion projects, urban farming, solid waste disposal as well as industrial pollution.

Speaking at the same meeting, Community Water Alliance Programmes Manager, Hardlife Mudzingwa said urban farming was a major threat to wetlands adding that the use of fertilizers on wetlands had resulted in huge water purification costs.

“What it means is that as residents, we will bear the brunt of wetlands destruction as we will be faced with water shortages and we will also have to pay more for water due to the high purification costs,” said Mudzingwa.