Vice-President Mnangagwa is reported to have been discussing plans for a transitional government, including the MDC, to run Zimbabwe for five years after the impatiently awaited departure of Mugabe. Mnangagwa is said to be planning to compensate white farmers dispossessed by the land seizures and invite them to resume farming to revive the agricultural sector. 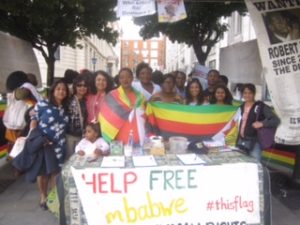 The discussions are reported to have involved army generals who are said to have softened their opposition to working with the opposition leader Morgan Tsvangirai. Reuters news agency says the reports draw on documents leaked from the Central Intelligence Organisation and information from politicians and diplomats.

Mugabe himself is implacably opposed to bringing back white farmers which would explain his recent increased criticism of the Vice-President. For its part, the MDC has confirmed that it received overtures from the Mnangagwa camp but the party is reported to be against joining any administration that is not the product of an election (see: http://www.newsdzezimbabwe.co.uk/2017/09/mnangagwa-plots-gnu-with-tsvangirai.html).

During the week Vigil activists protested outside the Zimbabwe Embassy against Grace Mugabe’s disgraceful behaviour. They attempted to deliver a letter to the Embassy on Tuesday but, although it was a weekday, the front door was closed. So they tried to deliver it to a side door but were told to put it in the post. It was sent recorded delivery and was signed for, according to Royal Mail, by the Embassy the next day. The letter reads:

Your violent and lawless behaviour has shamed and disgusted Zimbabweans worldwide. We list some international incidents in which you behaved disgracefully and embarrassed the country:

Other misdemeanours that have embarrassed and shamed Zimbabweans:

The people of Zimbabwe urge you to seek anger-control and relational therapy. We can put you in touch with reputable practitioners in Singapore, Kuala Lumpur, Dubai, Hong Kong and Johannesburg.