Grace Mugabe has long shown an obsessive interest in witches. She accused the then Vice-President Joice Mujuru of using witchcraft to try to kill the president. She certainly betrayed witch-like characteristics herself in the notorious Johannesburg incident a few weeks ago. 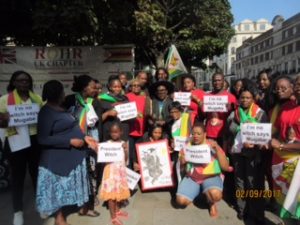 Less well known is Mugabe’s own obsession with witchcraft. Looking at his utterances over the years you will see he often mentions goblins and spells. Now the President has found it necessary to declare publicly that he is not a witch (see: http://www.zimvigil.co.uk/vigil-news/campaign-news/882-im-no-witch-says-robert-mugabe-after-ice-cream-poisoning-).

Mugabe was not referring to the usual speculation about a Faustian pact with the devil for eternal life. No, he had found it necessary to deny allegations that he poisoned Vice-President Mnangagwa who was mysteriously taken ill after eating at a Mugabe rally and was flown to Johannesburg for treatment. One report said the cause was ice cream produced by the Mugabe dairy.

Mugabe, in his protestations of innocence, went on to suggest that Mnangagwa, his ruthless enforcer for going on forty years, was ‘simply too weak’ – which could be taken to mean he was unfit for elevation to president. Mugabe went on to say: ‘Now the talk of witchcraft is the order of the day. Some are even saying the president is a witch. How many did I kill?’

Well, the Vigil recognises it’s very difficult to put a figure on this. Some say twenty thousand or more from Gukurahundi and an untold number from Murambatsvina. Others say the figure must be in hundreds of thousands given the poverty and starvation to which he has reduced the people of Zimbabwe.

A more surreal note was struck when the President went on to recommend that all sensible Zimbabweans should regularly see their doctors for a check-up – as he does himself, constantly flying off to Singapore. He doesn’t trust our own excellent local doctors, but we can. So everyone must make an appointment now for a medical check-up. Tell the doctors to send the bill to State House. Mugabe will pay them by witchcraft.