Community Action Accountability Teams (CAATs), established by communities working with Heal Zimbabwe in Gutu and Zaka facilitated four community interface meetings with traditional leaders from 19-21 September 2017. The dialogue sessions came as some traditional leaders are being accused of harassing and intimidating community members around the Biometric Voter Registration process. 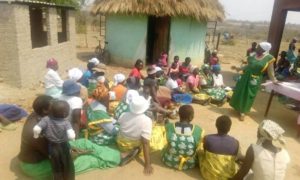 Chairperson of the Zaka CAAT (standing) making introductory remarks during the interface meeting.

As a way forward, the interface meetings resolved that the CAATs together with the traditional leaders and other opinion leaders collaborate and carry out public awareness campaigns on the importance of peace, tolerance, social cohesion ahead of the elections. During the public awareness campaigns, HZT shall also facilitate for organisations working on elections such as ERC and ZESN to attend and raise awareness on the BVR process as a contribution towards peaceful and credible elections. Traditional leaders were also encouraged to acquaint themselves with their constitutional obligations and duties such as not participating in partisan politics or furthering the interests of any political parties as outlined in Section 281 of the Constitution. Members of the CAATs also appealed to community members to approach them with cases of human rights violations so that they can facilitate for them to report the cases to the Zimbabwe Human Rights Commission (ZHRC) for redress.

A CAAT is a safe space group of women and youths from diverse religious, political and socio-economic backgrounds working together to build peace and demand social accountability from duty bearers.