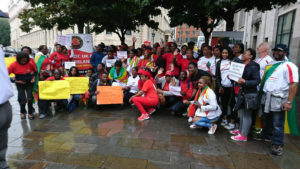 The demonstrations one, in commemoration of the UN International Day of Victims of Enforced Disappearance was initiated by ZHRO’s Mable Kayiya, Head of Marketing and the other, “NO to Violence” organised by MDC Youth Sharon Moyo, London Organising Secretary, were held in a great atmosphere of unity and purpose.

In spite of the rain, the event was very well attended by many Zimbabweans, who came from across the UK, some as far as Liverpool, Manchester and Birmingham.

The event was also to raise awareness of the abductions that happen at home.

Many highlighted the problem of missing activist in Zimbabwe calling on the government, SADC and the international community to do more to tackle the problem.

The Government has since refused involvement or to acknowledge that Itai Dzamara was abducted yet the activist was abducted by five armed men in broad daylight on 9 March 2015 which has spread terror within Zimbabwe.

“As we remember victims of enforced disappearance. I can’t stop to think about itai Dzamara. Can someone tell us where itai Dzamara is? Surely someone out there no where he is. There are many activities missing everyday and it’s going to be worse as we go into election in 2018. For all missing people i will  continue with the struggle till we are liberated from ZANU PF” said Sharon Moyo.

The practice of enforced disappearances has become a tool for intimidating the population, and of evading accountability.

Special attention should also be paid to family members of the disappeared who are torn between hope and despair.

The government needs to take responsibility for the multitude of serious human right violations, including the rights to personal liberty, and integrity.

“May I remind you that a government that systematically practice enforced disappearances does not care  what families go through and will do nothing in terms of the legal uncertainty, financial support for the wives and children and not to mention, the emotional suffering of the relatives” said Pythias Makonese.

It is the state’s responsibility to prevent enforced disappearances  perpetrated by either state or non-state actors. But when the state is responsible for arbitrary arrests, detention and abductions then its main objective is to ensure impunity.