Robert Mugabe is 93-years-old, and ailing. What might happen after he dies is a source of hope but also deep anxiety in his troubled country 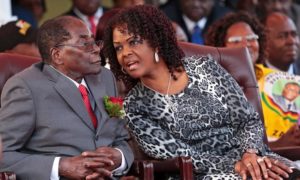 Daniel Mugabe was waiting for his first customers of the day amid the 1000-year-old ruins of Great Zimbabwe, the former capital of one of the greatest African kingdoms.

The 55-year-old tour guide to the ruins, perched high on a hilltop above miles of parched plains in south-eastern Zimbabwe, spoke in glowing of terms of his country’s elderly president, now in his 37th year in power.

“How could he rule so long if the people don’t like him? You can’t rule if people don’t want you to,” said Mugabe, referring to his namesake Robert.

But the president – no relation of Daniel – is 93-years-old, and ailing. A recent video showed him unable to walk without the aid of burly bodyguards. He disappears for weeks at a time to see doctors in Singapore.

“They say he is old but he has the memory of a young man. He will be in charge 10 years from now, I am sure,” the guide said.

Not everyone in Zimbabwe agrees.

A pastor touring the ruins with a group of church elders overheard the conversation. “We are all waiting now to see what will happen when the old man goes,” he said. “It’s long enough.”

Hope for imminent change in this troubled southern African mingles with deep anxiety.

Two intertwined struggles are under way: one to seize political power when Mugabe dies, the other to define the direction of the country in the “post-Bob” era.

The opposition is fragmented and unlikely to mount a serious attempt to take control, while the ruling ZANU-PF party is bitterly divided between factions loyal to candidates duelling for the succession. An election looms next year.

“The gloves are off. It’s a fight for survival and the rule book has been thrown out. It’s for survival,” said a senior journalist in Harare, the capital.

The main protagonists in the more immediate battle for power are Grace Mugabe, the president’s 53-year-old wife, and the vice-president, Emerson Mnangagwa, a veteran party official.

Mnangagwa, 74, is seen by most as the current favourite – and is the preferred choice of most western diplomats. He has some public support, and is thought to have the backing of the powerful military.

Grace Mugabe is a more flamboyant figure, once known for lavish shopping trips which angered many in the impoverished country. Recently she has become more involved in politics as the head of the ZANU-PF women’s wing, and publicly called on her husband to name a successor.

In August, she allegedly assaulted a young woman she found in the company of her two sons in a luxury apartment in Johannesburg, in neighbouring South Africa. The incident obliged South African authorities to hastily and controversially grant her diplomatic immunity to prosecution.

Zimbabwe’s media reported the alleged attack in detail, as well as the first lady’s multi-million dollar property portfolio in upmarket neighbourhoods of Johannesburg and the extravagant life of her two sons.

Even ZANU-PF loyalists were disgusted.

“Grace will not be president. The people don’t want her. There is not one in 20 who will vote for her,” said Daniel Mugabe, the guard.

The longer term battle to define the future course of Zimbabwe, which won its independence from the UK in 1980, involves more actors.

The traditional opposition is seen by many as out of touch. Its chances in the polls next year depend on whether the president is still alive, and if they can unite to take on the ruling party

“I fear there will be blood. The stakes are very high,” said a senior official in the Movement for Democratic Change (MDC), the most established opposition party, in the western town of Masvingo. “The ruling party are fighting to survive but if we fail that will be the end of us too.”

There are others militating for change. Last year, protests led by figures such as Evan Mawarire – a 40-year-old Baptist pastor who levered social media to launch a social movement – were violently repressed by authorities.

Though those efforts eventually faded, they have inspired a new wave of young activists, said Samm Farai Monro, a satirist, film-maker and activist based in Harare.

“We are trying to articulate a vision of the Zimbabwe we want, and of how we get there … I’m an eternal optimist. I joke that if you’re not, you’re diaspora. But here you have to be. Change will come,” the 37-year-old said.

Struggle in Zimbabwe is not simply political. For many in the country of 16.5 million people, it is a daily reality.

Twenty years ago, the country – blessed with a wealth of resources such as gold and platinum – was one of the most developed in Africa, with an envied infrastructure and education system.

Now the economy is in desperate trouble, with a shortage of hard currency so acute that queues to withdraw a daily maximum of $50 from banks stretch for hundreds of metres. Employers – in the private and public sector alike – frequently fail to pay salaries. A barrage of restrictions stifles trade.

Major highways are rutted, narrow and potholed. There are some new developments in the capital – such as the sprawling upscale mall in the suburb of Borrowdale patronised by the well-connected elite – but most buildings in the central business district of Harare date from the 1980s or even before.

Outside the cities, villages of traditional rondavel huts huddle around a few stalls selling vegetables, a poorly stocked grocery and a well-patronised liquor store.

A minimal level of development has gained the ruling party some support in rural areas.

“We still don’t have electricity but we do now have a clinic and a school. The problem is that there are very few teachers or doctors and no medicine at all,” said Lawrence, a tractor driver from Matobo in the south.

Many people depend on remittances from relatives working in Botswana or, especially, South Africa, to survive.

“Every family has someone there, cleaning, driving a taxi, labouring. Without that we would not survive,” said Plenty, 31, as she boarded a bus at Masvingo to travel the 800km to Johannesburg.

And if abundant recent rain has meant record harvests, the UN estimates a third of the population this year lacked reliable access to sufficient food, while the growth of more than a quarter of children has been stunted.

“A country needs to be able to feed your population when there is a drought, not when there isn’t,” said David Connolly, who was evicted from his 2,400 hectare farm near the southern city of Bulawayo by a ZANU-PF official in 2014.

Some have nothing at all.

“My husband went away, to Botswana for work, but did not come back. I have three children. Sometimes we sleep outside, sometimes we go hungry. People have promised me work but it never comes. I am sinking,” said Amazia, 36, in Bulawayo.

Yet descriptions of Zimbabwe as a “failing state”, or dark predictions of a “new Somalia” appear unjustified, at least for the moment.

Despite the brutality and corruption, the exercise of authority is not entirely arbitrary. When authorities moved to demolish the ‘creative hub’ set up by Monro in Harare, a pledge to modify the building to conform with planning regulations stopped the bulldozers. Police at roadblocks extract cash by finding minor infringements of traffic codes for which fines can be imposed, not simply through force or fear. Although foreign journalists are effectively banned, some local newspapers are vocal in their criticism.

Foreign investors are keen to acquire relatively cheap local businesses or assets. Any new leader in Zimbabwe might convince international lenders to reschedule or even write off some of the country’s enormous debt.

Morgan Moyo, a 24-year-old orphan in Masvingo who supports three younger siblings by fetching cheap clothes from South Africa to sell locally, said “a few changes here and there” would open up “so much opportunity”.

“It’s tough right now … but I believe things are going to get better.”