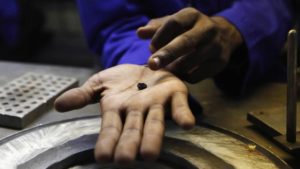 Diamonds were discovered in Zimbabwe in 2006 [File: Philimon Bulawayo/Reuters]

An anti-corruption group says it has evidence linking Zimbabwe’s ruling elite to “a decade of disappearing diamond wealth”.

The group’s report, An Inside Job, suggests diamonds produced by the CIO-linked company were traded in Belgium’s Antwerp and the UAE’s Dubai – two of the world’s leading precious stone marketplaces – and may have funded political repression.

The report accused “Zimbabwe’s highly partisan and oppressive military” of having significant links to another Marange diamond company, Anjin.

The company sold diamonds in Antwerp on at least three occasions, the report said, “likely in violation of EU sanctions against the military company that holds significant stake in Anjin”.

In a statement, the Antwerp World Diamond Centre denied on Monday that Zimbabwean diamonds sold by its auction in 2013 and 2014 breached European sanctions.

According to Global Witness’ “mounting evidence”, a 25 percent hidden stake in Mbada Diamonds – the largest diamond mining company in Zimbabwe – was owned by Robert Mhlanga, a retired member of Zimbabwe’s security forces.

“Companies have concealed their finances and shielded their operations from public scrutiny, hiding significant stakes in these companies held by the feared Central Intelligence Agency, the Zimbabwean military, and the government itself,” Global Witness said in a statement.

In 2013, a parliamentary committee reported “serious discrepancies between what government receives from the sector and what the diamond mining companies claim to have remitted to the Treasury”.

Zimbabwe’s diamonds, discovered in 2006, have frequently been the subject of controversy. The Marange fields are one of Africa’s biggest diamond finds in recent years.

The army cleared small-scale miners from the area in 2008 in an operation that Human Rights Watch says killed more than 200 people.

An international embargo was imposed on Zimbabwean diamonds following the atrocities, which was lifted in November 2011.