The reason why Mugabe and ZANU PF are still in power is only because Zimbabweans are not angry enough to get together and do something about removing them. 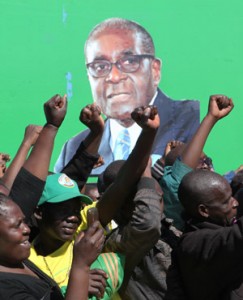 I don’t suppose any Zimbabwean is happy about their situation, unless of course you are a member of the elite or one of the beneficiaries of the ZANU PF rule. But even the most ardent rank & file members of ZANU PF cannot be happy about the extreme poverty of their lives.

But it is not enough just to be deeply unhappy, even upset, about your life, living in fear, hunger, destitution, frustration and depression, no matter how strongly you feel those emotions. Because until you get angry about it, you are not going to do anything about it. Or if you do, it will only be half-hearted, and you may soon slip back into your state of apathy.

The problem is that the equanimity that Africans are famous for throughout Africa, the Buddhist, Islamic or Christlike acceptance of their lot, no matter how bad it is, is actually what keeps them locked into poverty, and under the control of corrupt and oppressive governments. And it will stay like that until enough Africans get angry enough to do something about it.

In much of our lives, acceptance is actually a virtue, a very good thing. If you are ill, or in pain, or putting up with the daily challenges that crop up, getting angry about it is not going to help you. It is actually counterproductive.

But when you need dramatic change, such as to get rid of Mugabe and ZANU PF or to escape poverty, you need to feel the opposite, you need to get let anger build. Because if you don’t, you won’t do whatever is necessary to deal with the situation.

Let’s make it clear: by advocating anger, I am NOT advocating violence! That is definitely not the right way to go. All anger is like a volcano boiling away inside us. And there are three things you can do with it. One is simply find a way to block it, and that is what we are all taught to do. The other is to let it blow, but I think most of us realise that is usually very counterproductive, doing far more harm than good, just as an exploding volcano will destroy anything in its path. And we all know that aggression, violence, fights or wars rarely solve anything except mayhem and a far worse situation than existed before.

But there is a third thing you can do with a volcano, and that is to harness its power to produce electricity. In Iceland and other parts of the world, they harness it to heat homes, provide constant hot water and drive machinery.

And this is want I am talking about: harness it to give you the motivation to act, and then the drive and determination to keep going until you succeed.

The great Gandhi said that his great motivating power, his desire to change the world, came from his anger. Yet looking at him, no one could believe there was any anger in him. He must on the surface have been one of life’s calmest, most peaceful men.

If Africans can learn to do the same thing – to harness anger to use in peaceful, productive ways – they will soon work out how to get rid of Mugabe and ZANU PF in the RIGHT way, and then work for prosperity in the right, most productive way.

This is how all great sportspeople, top businesspeople, explorers, lawyers, politicians use their anger. We can do the same.

But stay as you are now, accepting, resigned to the situation, and ZANU PF will just stay in power.