The MDC is extremely concerned about the recent deterioration in the economic and financial situation in Zimbabwe. 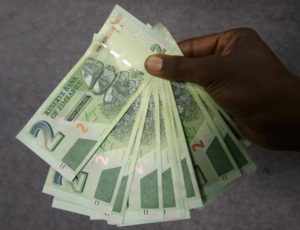 The liquidity crunch has now deepened as the bond note has virtually collapsed against hard currencies such as the US dollar and the South African rand. The illegal foreign currency black market is now back with a bang and over the weekend, confirmed reports showed the bond note trading at almost 2 bond notes to the US dollar. Essential goods such as cooking oil and washing soap are now steadily disappearing from shop shelves.

We don’t want to sound alarmist but the sad reality is that Zimbabwe is rapidly going back to the harsh economic situation of the period between 2007 – 2008. Most supermarkets around the country have now steeply raised prices of basic commodities and goods such as cooking oil and other basic grocery items are now being rationed per customer.

The RBZ Governor, John Mangudya, has hopelessly failed to keep his earlier promise on bond notes because illegal black market dealers are now the only people who seem to have access to this surrogate currency. The majority of ordinary Zimbabweans are failing to get their money from the commercial banks and the US dollar is now like gold dust, very difficult to come across.

Fuel queues are now back with a vengeance and all over the country, most service stations are running out of both diesel and petrol. Diesel 50 and unleaded petrol seem to be the most scarce commodities on the fuel market nationwide. As the economic situation spirals out of control, the Zanu PF regime is utterly and completely clueless regarding what steps should be taken to arrest the collapsing economy. President Robert Mugabe and members of his family, including a bloated delegation of about 70 people, were recently in New York where they were busy spending scarce foreign currency at expensive and exclusive shops in Manhattan. How selfish and insensitive can these people be?

The MDC reiterates its call for all eligible Zimbabweans to come out in their millions and register to vote during the ongoing BVR exercise. We appreciate that ZEC has embarked on a painstakingly slow and inefficient BVR exercise but then we cannot afford to be apathetic by deliberately failing to register to vote. This is exactly what the collapsing and faction-infested Zanu PF regime would like see happening because, the world over, fascist and dictatorial regimes are aided and abetted by voter apathy.

In the same breath, we call upon ZEC to expedite the BVR exercise by promptly obtaining delivery of the outstanding 2600 BVR kits. The toiling masses of Zimbabwe should make sure that on polling day next year, the Zanu PF regime is booted out of power.

With the Zanu PF regime out of the way, Zimbabwe can begin its process of socio – economic reconstruction and financial rehabilitation under an accountable, democratic and people-centred government. This is the only peaceful and viable solution going forward.

We should now come out of our comfort zone and rigorously mobilise for voter registration. We cannot continue to be crybabies. The future of our great country is firmly in our hands. There’s a huge light at the end of the tunnel. This is the home stretch. We are soon getting to the promised land. There’s absolutely no doubt about that.