Ordinarily, September is the month of jacaranda blooms, the arrival of summer in Zimbabwe – but this year, it was the month of Zodwa Wabantu. In his usual humorous style, Jera reflects on the month dominated by Zodwa. 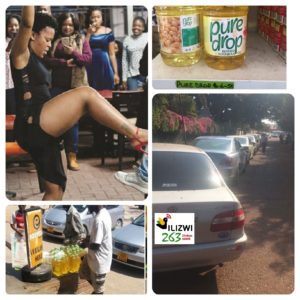 What happened while Zimbos discussed Zodwa

I like thunder thighs. I like women in general, particularly those of the scantily clad genre. This declaration is essential for the point I am about to make. Now that we have that out the way, we can discuss the meatier subject.

Unless you have been living in a mole burrow for the past month, you will know the whole Zodwa furore. In fact, the name Zodwa Wabantu has been unavoidable, even with the most high-tech junk filter installed on your internet device. But for the benefit of those who have been in some peaceful place where pantiless women do not intrude on social media, here is the Zodwa Wabantu summary.

A woman called Anne Nhira, citing moral reasons, wrote to Honourable minister Patrick Zhuwao, demanding that Zodwa be barred from the Harare carnival, an event modeled around Brazil’s world famous flesh fest. Nhira and people like her felt that Zodwa’s dressing would have offended their sensitive minds – at an occasion where Brazilian guest dancers wear next to zero. For the benefit of those who may not know Nhira, here she is dressed in her Sunday best. What a choir girl!

Minister Zhuwao, being the nephew of a devout Catholic – a religious man who has never caused the deaths of over 20,000 Matebeles, who has never caused the rape of over 60,000 women during Gukurahundi genocide which never occurred in this deeply “Krishen” state of ours – did the only thing that a morally astute minister would do. He barred Zodwa Wabantu’s tawdry open legged dance.

Zimbabweans – 95% of whom write monthly letters to the Diaspora, asking for money because they are jobless – were up in arms. Anne Nhira was called all sorts of names, most of which cannot be printed in this respectable publication. Photographs of Nhira, such as the one above, were exhumed from the recesses of the unforgiving and non forgetful internet. Beneath such photographs, the people asked just who the hell she is to stand in judgement of Zodwa. Zimbabweans who cannot agree on the Grand Coalition, cannot agree to come together and pick up litter from the revolting streets of their cities, Zimbos who cannot unanimously agree on anything at all, fully agreed that Anne Nhira is not a nice person and that Zodwa should be allowed to smile at the camera lenses through what part of her anatomy she chooses.

The matter subsequently went to the censorship board. I imagine the board members drove all the way to the office in US$30,000 Ford Rangers. I imagine around the oval boardroom table was a neat row of mineral water and Mazoe Orange bottles, complete with polished glass tumblers for them to sip cool beverages, while discussing Zodwa’s weighty matters.

What’s Zodwa got to do with the price of cooking oil?

After hours of heated deliberation – I imagine these important matters take hours – the board emerged from the conference room to meet a mob of expectant reporters, newsmen and women who had abandoned stories of floods, diseases and falling living standards. There before these reporters, the board announced their decision. Zodwa is free to part her knees in Zimbabwe, in her usual state of inadequate dress. Zodwa wins. Bottom power trumps dreadlocks and Gushungo connections.

Who is the loser?

But who is the loser, really? Where there is mention of a winner, there must be a loser somewhere licking their wounds. The losers are the 95% jobless Zimbabweans. The losers are the citizens who now find themselves in long, winding, energy sapping fuel queues. The losers are people paying $18 for a $4 bottle of lotion. The vanquished are those who live in the only country on earth where the American dollar – the world’s most popular store of value – loses its worth overnight. The defeated are those whose economy is shredded like Zodwa’s leather sleeves. The real losers are children whose parents wrangled over Zodwa but still haven’t paid September school fees.

Brenda Dube, on Twitter, sums up Zimbabwe rather eloquently – “they were caught napping with Zodwa’s breast in their mouth.”

I like thunder thighs. I like women in general, particularly those of the scantily clad genre. But I love my country more. I cherish the future of my grandchildren a lot more than Zodwa’s undergarments, or any other trivial matters that might trend on social media tomorrow.