President Jacob Zuma will on Tuesday, 3 October 2017, host the President of the Republic of Zimbabwe, His Excellency President Robert Mugabe, during his Official Visit to South Africa to attend the 2nd Session of the South Africa-Zimbabwe Bi-National Commission (BNC) scheduled to take place in Pretoria. 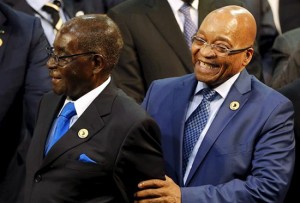 The Agreement establishing the BNC was signed in April 2015 and inaugurated in October 2016 in Harare, Zimbabwe and it stipulates that the BNC should meet on an annual and rotational basis. The BNC session, which will be co-chaired by President Zuma and President Mugabe, will afford an opportunity to both Heads of State to review the state of the bilateral relationship between the two neighbouring countries.
The BNC will further provide a platform to strengthen and deepen the warm and cordial bilateral relations between the two countries as well as to review and determine the actual progress made on bilateral undertakings and commitments made during the inauguration Session of the BNC last year.
President Zuma and President Mugabe are also expected to deliberate and exchange views on regional and global issues of mutual concern, particularly peace, security, stability and development in the SADC region and some parts of the continent.
South Africa and Zimbabwe have good bilateral political, economic and social relations underpinned by strong historical ties dating back many years. The two countries do not only share strong historical relations but also economic cooperation.  Zimbabwe is one of South Africa’s top five (5) trading partners on the continent, with trade statistics showing annual growth. In 2016, South Africa’s exports to Zimbabwe amounted to approximately R29.3 billion.
There are over 120 South African companies doing business in Zimbabwe in various sectors including mining, aviation, tourism, banking sector, the property sector, the retail sector, construction sector, and the fast food sector and many more.
To date, the two countries have signed more than 40 Memoranda of Understanding (MoU) and Agreements. The Agreements and MoUs  cover a broad range of areas, which include among others, trade and investment, immigration, defence, transport, agriculture, environment, energy, health, labour, water management, taxation, as well as arts and culture.
President Jacob Zuma will be supported by Ministers of International Relations and Cooperation, Ms Maite Nkoana-Mashabane; Defence and Military Veterans, Ms Nosiviwe Mapisa-Nkqakula; Trade and Industry, Dr Rob Davies; Labour, Ms Mildred Oliphant; Home Affairs, Professor Hlengiwe Mkhize and Minister of Transport, Mr Joseph Maswanganyi.
Enquiries: Dr Bongani Ngqulunga on 082 308 9373 or [email protected]
Issued by: The Presidency
Pretoria
Post published in: Featured