THE Constitutional Court on Wednesday 04 October 2017 dismissed an application filed by Remnant Church leader Pastor Patrick Mugadza seeking an order to stop his prosecution for allegedly prophesying the death of President Robert Mugabe. 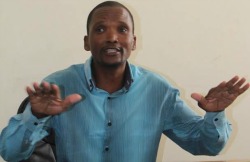 Pastor Mugadza had through his lawyer Advocate Tawanda Zhuwarara instructed by David Hofisi and Gift Mtisi of Zimbabwe Lawyers for Human Rights, petitioned the Constitutional Court seeking an order declaring that his arrest and prosecution for allegedly prophesying that President Mugabe will die this year is a violation of his fundamental rights.

Chief Justice Malaba ruled that the Magistrate did not pronounce herself on some critical issues such as whether the application was frivolous and vexatious when he heard Pastor Mugadza’s application for referral.

The Chief Justice indicated that Pastor Mugadza could have filed an application for exception to the charges in the Magistrates Court if he felt that his fundamental rights were violated and that he had the option of challenging the constitutionality of the law he stands accused of breaching after standing trial first rather than raise some constitutional questions and petition the apex court.

Prosecutors charged that the clergyman caused the publication of a story in an online media publication claiming that President Mugabe will die on 17 October 2017.

The state claimed that Pastor Mugadza allegedly insulted the Christian religion and the African tradition by uttering some words, which are a taboo to predict someone’s death.

In his application, the clergyman wanted the Constitutional Court to determine the violation of several of his fundamental rights including the right to dignity, equal protection and benefit of the law, freedom of conscience and freedom of expression.

The provisions, Pastor Mugadza argued, are not necessary in the interests of defence, public safety, public order, public morality, public health, regional or town planning or the general public interest and are excessive in their limitation of the right and do not ensure enjoyment of any rights or freedoms by others.