As if it was a continuation of his magnificent ministry, there were undoubtedly many things to learn and hopefully emulate from the reflections from tributes and the sermon along with more informal exchange of anecdotes of his life between mourners at Bishop Xavier Munyongani's funeral at Driefontein Mission in Gweru Diocese on 20 October 2017. 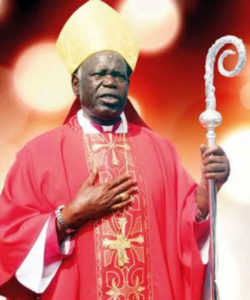 However I just want to focus instead only on the size and composition of the crowd which was reportedly the largest in Gweru Diocese at least. As the Shona saying goes: ‘pakanga pasingapfigwi mate‘ (which roughly translates to: ‘there were so many people that you dared not spit’ [as you spittle would land on someone]). The apparently unprecedented crowd was all the more surprising against the backdrop of hardships with cash and otherwise in the country, yet people came in droves from all corners of the country to pay the last respects. Significantly, people came out of their own volition.

The government officials who were present either in their official or personal capacity, along with most probably security agents milling around with mourners given the reputation of the deceased, the size of the crowd should have been a point of reflection for each and every one of them in so far as there had been no rent-a-crowd scheme to enforce people and busing them to attend: from schools, market stalls and the street. One’s life must speak of itself by way of people voluntarily coming to a funeral, no matter how many or how few.

Who among the government officials in attendance or elsewhere would still cherish at their own funerals, the idea of their colleagues left behind (many of whom would be shedding crocodile tears anyway) enforcing attendance by unleashing youths or security agents, thus perpetrating the lies into the afterlife? On a more positive note, hopefully it’s never too late to change, and so in some way they could take a leaf out of Tanzania’s Julius Nyerere whereby the whole country in Tanzania openly with no coercion mourned for their former dear leader, significantly including those in the Diaspora (and as for the UK I can personally testify) in so far the Tanzanian authorities would have had no power to enforce attendance of the latter at mourning venue(s) even if they had wanted.

The composition of the crowd put the lie to the regional and tribal divide created and fanned by our body politic for their own selfish ends, in particular the ruling ZANU PF whereby such contrived divisions are partly and largely a manifestation of their own internal divisions. The composition of the crowd transcended regional and tribal divide, perhaps more reminiscent of the mourning for Joshua Nkomo. Who among the government officials would only want to be mourned by those of their tribe or region, even if for the sake of argument leaving aside questions of whether or not within such respective ‘constituencies’, people would voluntary attend in numbers? Both Julius Nyerere and Joshua Nkomo would be the perfect role models.

Politicians aside, the size and composition of the crowd is indeed a lesson for us all, to a lesser or greater extent.