THE Constitutional Court will on Wednesday 04 October 2017 preside over an application in which Remnant Church leader Pastor Patrick Mugadza is seeking an order to stop his prosecution for allegedly prophesying the death of President Robert Mugabe. 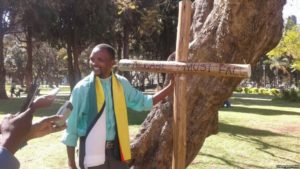 Through his lawyers David Hofisi and Gift Mtisi of Zimbabwe Lawyers for Human Rights, Pastor Mugadza, petitioned the Constitutional Court seeking an order declaring that his arrest and prosecution for allegedly prophesying that President Mugabe will die this year is a violation of his fundamental rights.

Prosecutors charged that the clergyman caused the publication of a story in an online media publication claiming that President Mugabe will die on 17 October 2017.

Prosecutors claimed that Pastor Mugadza allegedly insulted the Christian religion and the African tradition by uttering some words, which are a taboo to predict someone’s death.

The clergyman wants the Constitutional Court to determine the violation of several of his fundamental rights including the right to dignity, equal protection and benefit of the law, freedom of conscience and freedom of expression.

The clergyman argues that while the Constitution protects all manner of expression, these two provisions criminalise distinct forms of expression hence are they a limitation on free expression.

The provisions, Pastor Mugadza argues, are not necessary in the interests of defence, public safety, public order, public morality, public health, regional or town planning or the general public interest and are excessive in their limitation of the right and do not ensure enjoyment of any rights or freedoms by others.