Zimbabwe’s President Robert Mugabe fired his finance minister in a cabinet reshuffle that weakened the influence of his vice-president, who is vying to succeed him after 37 years of rule over the southern African nation. 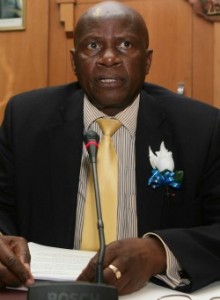 Patrick Chinamasa was the most high-profile ally of Emmerson Mnangagwa to fall in the reshuffle — which Mr Mugabe announced on Monday following attacks on his deputy that were led by the president’s wife, Grace.

Last week Mrs Mugabe accused Mr Mnangagwa of presenting a severe recent bout of illness as an attempt by her to poison him. She added that the vice-president, who has allies among veterans of Zimbabwe’s war of independence, was fomenting a coup. The reshuffle also removed control of the justice ministry from Mr Mnangagwa and assigned other key posts to supporters of a faction that is linked to Mrs Mugabe.

Mr Chinamasa was replaced by Ignatius Chombo, a former home affairs minister. The public infighting in Mr Mugabe’s ruling Zanu-PF is a sign that a battle between Mr Mnangagwa and Mrs Mugabe to be his unquestioned successor is coming to a head. The 93-year old Mr Mugabe is the official Zanu-PF candidate in a presidential election, which is due by July 2018 at the latest, but is increasingly ailing physically.

Mrs Mugabe has been associated with a younger generation in Zanu-PF, while the 75 year-old Mr Mnangagwa has been linked – especially through Mr Chinamasa – to promises of reform to entice international lenders back to Zimbabwe, in order to relieve a financial crisis. Zimbabwe’s economy and banks, which use the US dollar as the main currency after hyperinflation in 2008 led to the withdrawal of the country’s own money, have been buckling under a growing shortage of cash this year.

The shortage has been caused by money flowing abroad to pay for imports, which the central bank is attempting to stem by issuing ‘bond notes’ that are meant to equal dollars in value. But the black-market rate between bond notes and US dollars has widened in recent weeks amid rumours of growing shortages including panic-buying of basic goods. Mrs Mugabe has become increasingly prominent in public Zanu-PF rallies alongside her husband — and in scandals abroad, including avoiding charges of beating a young woman in South Africa with an electrical cord, after she claimed diplomatic immunity.