This is the third excerpt from The Axe and the Tree by Stephen Griffiths. The Elim Mission Massacre was one of the worst atrocities of the Zimbabwe liberation struggle. 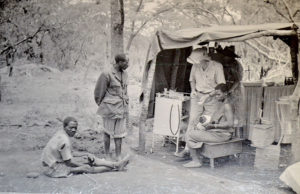 1951 Dr Cecil Brien at work in his dispensary at Katerere

Captain Dick Paget of the Rhodesian Army Medical Corps was responsible for founding Tsanga Lodge, an innovative rehabilitation centre for badly wounded Rhodesian servicemen, based in the mountains of the Eastern Highlands. As the ceasefire took effect, the integration of three different armies began. In early 1980, Captain Paget knew there would shortly be an influx of wounded ZIPRA and ZANLA guerrillas to the Rhodesian Army’s rehabilitation centre. He addressed his staff on the eve of the arrival of the first guerrillas at Tsanga: “What we have to remember here at Tsanga Lodge is that each individual in this war fought for what he or she genuinely believed in. The job we have here at Tsanga Lodge, staff and patients alike, is to help our fellow humans who have been injured in this war.”[i]

Despite Captain Paget’s upbeat and inclusive approach, there was apprehension among patients and staff alike. How would the guerrillas, former enemies, now members of the party ruling the country, act now they had gained the upper hand?

The medical team were in the Tsanga Lodge pub when it was announced that the first small group of guerrilla patients had been driven in through the gate of Tsanga Lodge.

Guerrillas arrived in ones or twos and made little difference initially to the cohesion and atmosphere. Severely injured as they were, the fighters’ main focus was usually on their own healing and rehabilitation. They had their own apprehensions about how they would be treated by Dick Paget and his staff, considering that the team had managed so many Rhodesian soldiers severely injured by guerrillas.

One of the guerrillas Paget described as a “really splendid guy, a first rate medic and a delightful character. I would have loved to have him on the Tsanga staff … We had many interesting discussions and I was sorry to see him leave.”

But among that first group of ZANLA guerrillas was a “nasty piece of work” by the name of Chenjerai Mupedzisi, who was admitted to the Lodge having been rendered paraplegic in a road traffic accident at the war’s end in 1980.[ii] Bitter and full of rage, Chenjerai was disruptive and violent.

Struggling with her grief and confronted with her inability to care for her erstwhile enemies, now her patients, Isobel took a break and went to Harare. To her surprise, the same minister who had taken her uncle’s funeral, who had spoken the words that were still echoing in her head, was holding a service at a nearby Country Club. Isobel made a beeline for the meeting, knowing that she had to see him and ask him what he had meant at the funeral. Gently and clearly the minister pointed Isobel to the Lord. She recalled, “I was born again and filled with the Spirit.”

Isobel returned to Tsanga and found that inexplicably she was able to love and care for the new arrivals, including the tough and demanding Chenjerai: “It was Christ in me that did.” Isobel took opportunities to share her new-found faith with Chenjerai when she could. He seemed to listen to what Isobel had to say, despite his surly, offensive manner.

Captain Paget’s courageous attempt to make Tsanga a place of healing for all former combatants, whatever their previous allegiance, was not to last. A visiting officer of the new Zimbabwe National Army and former ZANLA combatant made remarks to which Captain Paget took exception. The altercation led to punches being thrown, but the heated debate was eventually calmed and peace was restored. The two officers apologized to each other and the whole issue was forgotten. But Paget believed Chenjerai forced the issue with the authorities, even though his colleague was willing to let it be. As a result, Paget was forced to relinquish the leadership and leave Tsanga Lodge.

Just before Paget’s departure, Clifford Kapofu,[iii] an African pastor working for a group called Intercessors for Zimbabwe, was invited to speak at Tsanga Lodge. While Kapofu was preaching, Chenjerai began to scream and cry out for mercy from his wheelchair. Chenjerai was taken to another room as his anguished shouts and weeping were profoundly disturbing for the other patients in the room. Clifford Kapofu went out and listened to what he had to say.

Chenjerai poured out a confession. He claimed to have been a member of the second of the two ZANLA sections that had joined forces in the Eagle School attack. He had been haunted over the years by his involvement in the killing of the missionaries in the Vumba, among other atrocities he had committed. Despite approaching spirit mediums for help, Chenjerai had found no relief from his torment. Overwhelmed by guilt and shame, he was longing for absolution and peace. Clifford Kapofu told him that help would only come if he asked Jesus to forgive and save him. Chenjerai prayed earnestly, longingly for the mercy of the risen Christ, and it was granted to him.

Much to Paget’s surprise, Chenjerai seemed to lose his vindictive rage and surliness. The young ZANLA guerrilla asked to see the Pagets at their farewell party and thanked them for their work. An Assemblies of God minister began to visit Chenjerai regularly, and witnessed him begin to grow and mature in his faith and to share his story with others.

The seed that had been planted in a welter of blood and sorrow five years before had borne strange and beautiful fruit again.

Garikai arranged to see my father a month after their first meeting. My father was astonished to hear him say that seven other members of his guerrilla section had come to faith, apparently through Garikai’s own witness within a month of his conversion. All seven had participated in the killings at Elim.

But Garikai was not aware of Chenjerai’s story, members as they were of two different sections that had combined forces for the killings at Elim and then gone their separate ways. My father was struck by the fact that nine of his colleagues had prayed for the forgiveness of those who were killing them. Eight missionaries had died together that night and one had died a week later. Eight guerrillas found faith from one section and one from another section. Nine had died; nine had found new life.