Two elderly gents meet in Harare to reminisce about the good old days. It is rather sweet. They end up playing children’s party games. 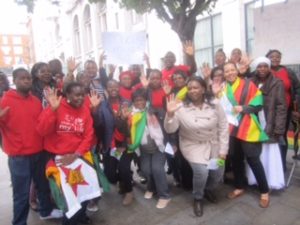 President Mugabe invites Sir Nicholas Soames to sit in the chair that his father once occupied as last governor of Rhodesia. ‘No!’ came the reply. Clearly the music hasn’t stopped yet. ‘It’s now your seat’.

Mugabe obviously enjoyed the game. He’s not had much to cheer him up of late – what with the shenanigans in his family and party and the imploding economy. He wallowed in a bit of nostalgia, going on to give an enthusiastic briefing to the government-controlled press (see: http://www.chronicle.co.zw/president-says-zim-britain-ready-to-start-afresh/).

From his comments it is not clear who was more delusional – himself or the British MP and former minister who, Mugabe said, carried messages of goodwill from Prince Charles as well as former foreign secretary Lord Carrington who presided over the Lancaster House conference leading to independence.

There is a mutual readiness by Britain and Zimbabwe to open a new chapter of rapprochement, he gushed, claiming that Sir Nicholas had told him: ‘There are some good people who are still your friends in Britain’ and that Soames was part of a private initiative by friends of Zimbabwe in the British establishment to normalize relations between the two countries.

Back in London, another MP, Kate Hoey, Chair of the All-Party Parliamentary Group on Zimbabwe, expressed scepticism. ‘This meeting will only pander to the vanity of a wily and ruthless dictator’, she said. Soames was being gulled by the Zanu PF elite instead of meeting the brave campaigners for democracy and the people suffering from decades of brutal and kleptocratic misrule.

As far as the Vigil is concerned, the only parcel Mugabe should be allowed to pass on should contain the resignations of him and his government.

FOR THE RECORD: 56 signed the register.