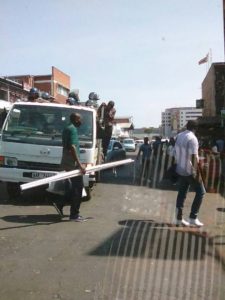 “The anti-riot police, who have been moving in their hundreds and in trucks, are armed. They have been evicting vendors and destroying their properties,” the Zimbabwe Human Rights Association (ZimRights) said in a statement.

It said the evictions would destroy the livelihoods of the vulnerable and the poor.

“ZimRights urges the President of Zimbabwe Robert Mugabe, who issued the order for the evictions, to stop the unwarranted human rights violations and uphold the Constitution.”

On Thursday morning police launched Operation Restore Order, with hundreds of riot police fanning out across the city centre. The operation came five days after Mugabe said Harare’s roads should be cleared of illegal vendors. He said Harare was dirty and should be made “smart” because it was the capital.

The main opposition MDC party led by Morgan Tsvangirai said Mugabe’s government was only addressing the “symptoms” of the country’s economic problems. Unemployment is estimated to be over 80%.

“For as long as there are no jobs and other viable business opportunities that are open for the majority of the people, the problem of indiscriminate vending will simply not disappear,” the party said in a statement.

“Vendors are NOT the problem. The problem is Robert Mugabe and his clueless and corrupt Zanu-PF regime.”

Despite the heavy police presence, there were no immediate reports of violence, and so far only four vendors have been reported arrested.

The Harare City Council, which is backing the clean-up campaign, told the state-run Herald: “We are progressing very well and there is peace and tranquillity.

There is order and no resistance at all,” said the city spokesperson Michael Chideme.