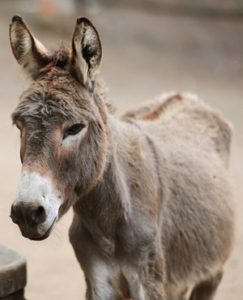 The factory will slaughter up to 70 donkeys per day to feed the Asian market for meat and skins when it starts operations this month, a company official said.

“We have already started buying (donkeys) around the country as far as Gokwe, Plumtree, Gwanda and in between Gweru (in central and southern Zimbabwe),” said Gareth Lumsden, director of Battlefront Investments.

“We are targeting China in particular, it (donkey meat) is a delicacy there. They eat the meat but the important part is the skin,” he told the state-run Sunday News. He said his company would target old animals or those in poor physical condition.

News of the abattoir has sparked anger from local welfare groups.

But she added: “People are desperate, so people are going to sell their donkeys and that’ll send the population crashing.”

She said abattoirs in the region, including in Botswana and Tanzania had been shut down over animal welfare issues or because of plummeting donkey populations.

“Donkeys are more valuable as a draft animal than a slaughter animal,” she said.

The Aware Trust, which runs veterinary clinics to treat thousands of donkeys in rural areas, said news of the abattoir marked “a sad day for donkeys in Zimbabwe and for the thousands of rural folk who depend on them”.

In a comment posted on its Facebook page the group said: “It seems there is no end to animal exploitation when there is a quick buck to be made.”

The UK-based charity, The Donkey Sanctuary, said last month that plans to open abattoirs in Namibia, thought to have many more donkeys than Zimbabwe, could wipe out their donkey population within three years.