The were isolated skirmishes in Gweru CBD’s Patel’s Mega Mart yesterday when the Zimbabwe Republic Police and the municipal police attempted to evict vendors selling their wares at undesignated sites. 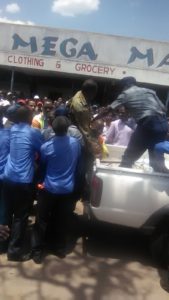 This came after an identified male vendor resisted arrest and the patrolling officers started beating him. This did not go down well with other vendors who started throwing missiles and barricading Leopold Takawira road. 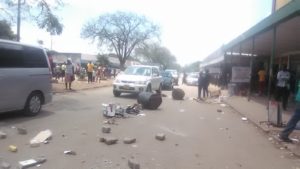 Armed police arrested several vendors resisting moves by the government to remove them from the streets following an order by President Robert Mugabe to get rid of people selling various wares in public.

This reporter witnessed cops manhandling two vendors by their legs and neck as they shove large quantities of seized goods into their well-known patrol car, while scores of vendors expressed anger at the beating of the handcuffed fellow vendor.

The drama started from Patels and spread spread like bush fire through Avalanche Shop opposite DST situated at Leopold Takawira road corner Robert Mugabe way. Angry vendors from various selling points joined in, shouting and throwing stones at the patrolling officers while helping fellow vendors resist arrest from the security personnel, who were randomly ransacking, kicking, picking and throwing the informal traders’ tomatoes and other fragile wares into their white double cab council vehicle.

In an interview, a vendor who identified himself as Chief, said their goal was to facilitate peaceful protests while protecting their members and property from abuse.

“We are not criminals but law abiding citizens who want to earn an honest living. If fighting and harassing vendors was working by now there must have been no one selling in the street. The council officials have no more selling bays to offer more vendors. We paid $6,00 for these places long back but up to now they haven’t given us.

“Vending is not a problem, the problem is those in power who promised two million jobs but up to now not even one job has been created. There is almost 95% unemployment in Zimbabwe. Why are they troubling us because of their total failure?” said Chief.