This letter sent to President Mugabe this week by an organisation representing street vendors in many countries is both important and significant. Street vending is not illegal when it is authorized by the Council. It is the Local Authority that has the legal right to designate vending areas and to register venders who in return are expected to make a small contribution to local finances. 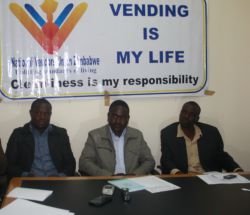 This effort by Mr. Mugabe to “clean up” the City center is simply not workable – we estimate that there are in excess of 2 million venders in Zimbabwe and that their contribution to the economy is very considerable. In addition they provide a means of living for many more millions who would otherwise be unable to meet even their most basic needs.

The informal economy in Zimbabwe and in all African States is much larger than the formal economy. It is a massive generator of skills and business acumen and out of it comes many of our new business persons who are today making a huge contribution to the wider economy.

This letter says it all.

On behalf of StreetNet International, representing 612 999 members in the sector of street vendors, informal market vendors and hawkers organised in 54 affiliated organisations in 49 countries in Africa, Asia, the Americas and Eastern Europe, we write to express our deep concern with the current situation in Harare City Central Business District where street vendors are facing evictions and clashes with City Police officers as part of Operation Restore Order.

StreetNet considers such actions towards our sisters and brothers in Zimbabwe, brutal, unacceptable and in violation of their human and worker rights.  In an economy where only 15,5% of all working people in Zimbabwe are paid employees with permanent contracts, forcing a large proportion of workers in the labour force to work in the informal economy, proper dialogue and solution-based approach, rather than forced removals which victimise informal workers, would be more appropriate.  These workers have a right to earn a living for themselves and their families.

According to the information at our disposal, “Operation Restore Order” is in violation not only of the constitution of Zimbabwe which states that “the state and all institutions and agencies of government at every level must adopt reasonable policies and measures and provide everyone with an opportunity to work in a freely chosen activity, in order to secure a decent living for themselves and their families”, but also in violation of most ILO Conventions and Recommendations.

As recently as 2015, StreetNet International participated side-by-side with government officials of Zimbabwe who also represented the African continent as group spokespersons, in crafting a new ILO Recommendation 204 on transitions from the informal to the formal economy. We were all in agreement that the principle “Recognizing the need for Members to take urgent and appropriate measures to enable the transition of workers and economic units from the informal to the formal economy, while ensuring the preservation and improvement of existing livelihoods during the transition” (R204 preamble) should be complied with.

We urge your government at both national and local level not to renege on the provisions of ILO Recommendation 204, especially not so soon after its adoption with strong Zimbabwean government participation.  We urge the Zimbabwean government to adopt a more inclusive way of dealing with street vendors in Zimbabwe through negotiations with organisations of street vendors, including StreetNet’s affiliate ZCIEA (Zimbabwe Chamber of Informal Economy Associations) and other relevant stakeholders.  We stand in full solidarity with all street vendors and informal traders of Zimbabwe, and call for an end to Operation Restore Order – an attack on the livelihoods of the working poor which the world is watching.