Five centuries ago a little-known Monk in a German Monastery nailed a short statement onto the door of a local Church. His name was Martin Luther and the simple principles he laid out in Latin changed the world. 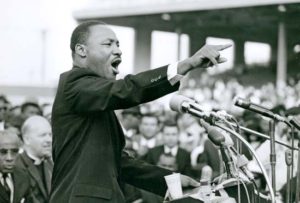 The Reformation is celebrated in the Old City of Geneva where a monument has been built into the City Wall. For me as an Evangelical Christian this was always a deeply moving place as the reformation movement became perhaps the most important in the Centuries that followed and remains of basic importance in virtually all aspect of modern life.

In the 19th Century, an unknown intellectual taught a small class of students at a German University. His name was Hegel and his ideas formed the foundation of the ideas used by Karl Marx to initiate the Communist revolutions in the 20th Century. His ideas were later used by another little-known German called Adolf Hitler to propound his ideas underlying a thing he called National Socialism. The combined impact of these new social/political movements was enormous – tens of millions lost their lives, more tens of millions were imprisoned and tortured and whole societies were brought under the heel of the totalitarian Governments that emerged because of Hegel’s teachings and based on his ideas.

Let no one tell you that ideas do not matter. What you know and think makes a huge difference in everything.

If you take the historical example of China. The global conflict of ideas after the Second World War gave rise to the capture of the State of China by the Chinese Communist Party under the leadership of Mao. In the following three decades China went through turbulent times, radicals tore the society apart and the “Red Revolution” tried to transform Chinese society into a Marxist/Leninist haven. The grip of Mao through this time was absolute and his attempts to collectivize agriculture and change the way Chinese peasants worked, led to tens of millions dying of hunger, malnutrition and starvation.

Then Mao died, his wife was thrown into prison and her three compatriots – one a nephew and the others powerful member of the Mao clique, were killed. The Red Army, long suffering and patient and loyal to Mao up to his death, stepped into the ring and took a little known intellectual from a Beijing jail and installed him as Secretary General of the Party. Deng took charge and in a series of what we would call “Tweets” today he enunciated the changes he wanted. “Do not worry about the color of the cat, does it catch mice?” “When you walk across a river and cannot see the bottom, feel your way with your toes.”

Many sophisticated observers showed little interest in what to them seemed like Chinese folk sayings. But what he was saying was, and in China they understood immediately, was “we remain Chinese, we support socialism and Marxist thought, but we are pragmatists and will back the policies and strategies that work for China”. The results have changed the world and nowhere more than in China itself.

This past week we have seen the Chinese “doing their thing” and the outcome has been a seamless transition to a new leadership team with Xi at its head. What many in the west will not understand or even comprehend for all its importance is the fact that the Chinese Communist Party has continued its efforts to change the thinking behind what Xi calls “Socialism with Chinese characteristics”. But in this new dispensation in post Deng China, Xi is imprinting on the Chinese way of doing things, his own ideas on the way forward.

We have already seen signs of what was to come at the Global Economic Forum where Xi used the events to spell out his vision of the world and how he sees China playing its role. He called for a more integrated world, for globalization to continue or even intensify. His grand scheme to unite Northern Europe with the Urals and the Republics of the East that emerged from the demise of the Soviet Union. While the United States withdraws from its central place as the biggest economy in the world and in huge regional trade groupings, China is stepping into the vacuum created. Domestically he has recognised that the China built up on exports to the world economy which have grown exponentially over the past 5 decades, is slowing down and China needs to depend to a much greater degree than before on its own population of a billion Chinese who are new entrants to the middle-income kingdom.

So, he uses his central place in the Chinese leadership, to spell out his IDEAS on where China must go in the next decade. By contrast the leadership of the West seems to have few new ideas. Who is thinking into the new world order where most people are going to be urban rather than rural. Who is thinking into the education system to prepare young people for the enormous changes taking place in the global economy and ordinary life. Just as the outdated military thinking in the late 19th Century led to the awful, bloody conflicts of the 20th Century and condemned millions to a ghastly death on the bloody fields of Flanders and the rest. Are our military leaders prepared for the new forms of warfare, conducted from air-conditioned offices in the Nevada Desert? Of what use is a billion-dollar aircraft carrier when its fate can be decided in an instant and the orders given and executed without any possibility of failure?

In a globalized world, it is going to be ideas that drive the process of change and development and this must be driven by people who think outside the box. I think Chairman Xi is there, Trump certainly is not. Britain and Brexit have taken a wrong turn and do not know how to go back. It’s quite simple really – they must look at the new world order in which we live and recognize that an Island State like the United Kingdom has no place outside regional power blocks. Any country that generates 80 per cent of its GDP from services and has 40 per cent of its trade with Europe, has no future outside the Club. They abandoned their Empire for Europe and they must now live with that decision – the Empire has moved on.

In Africa, those States that are under the control of the new elite, the post-independence generation, are making huge strides. Those States like South Africa and Zimbabwe that remain under the control of the “veterans of the long march” (to choose a Chinese phrase) are going backwards and this is entirely because the present generation of liberation leaders simply do not know how to manage the States they control so that they can survive and thrive in this new world order.

It was so in China, it was so in Europe, does anyone think it can be different in Africa? In Zimbabwe we have 5 million well educated young people in the Diaspora, they are learning new ways of doing things, adopting a new World View and when finally, they come home, nothing will ever be the same again. It’s just how to get there that is the tough question; in China the agents of change were the professional soldiers in the Red Army. In Zimbabwe?