The recent visit by Mr Soames to Mugabe was a heartless kick in the teeth to every Zimbabwean, making it obvious in the clearest possible way that the British Establishment has no concern at all for the citizens of Zimbabwe. 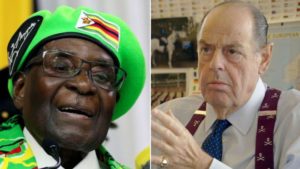 He first of all claimed he was representing friends of Zimbabwe in Britain’s Establishment, which would of course have made this a semi-official visit. However, when flack from the UK hit him, led by Labour MP Kate Hoey, he back-peddled, trying to claim this was a purely personal visit. This, if anything, makes Soames even more naïve. First of all, would any British MP have had the stupidity of even attempting to make a “purely personal visit” to Adolf Hitler? Yet Mugabe is every bit as evil a tyrant as Hitler ever was.

That Soames would even want to make such a personal visit says a lot about the nature of the man.

Second, even if it is true this was a purely personal visit – which it clearly was not – is he so naïve as to believe Mugabe would actually keep a private visit private, and not grab with both hands the opportunity to make public relations capital out of it? Mugabe is absolutely no fool, so of course he would!

Kate Hoey MP, who is also chair of the all-party parliamentary group on Zimbabwe, understood the situation far better than Soames when she said (according to the UK’s The Telegraph) the meeting would “pander to the vanity of a wily and ruthless dictator”. How right she was. But it also proves that Soames did not have the sense to discuss his visit first with the all-party parliamentary group on Zimbabwe, because they would without doubt have told him not to be so stupid.

You would have thought that in the give-or-take half century that has elapsed since the end of colonialism, White Western officials would have learnt by now that they are no match for Black African politicians. Time and again, they run rings around Westerners. As one African minister of state privately admitted to me, “It is easier just to go along with those people from the World Bank/IMF/UN, and then keep on taking their aid”. They privately enjoy the White supremacy attitude of White Western officials because, as they laughingly tell me, it makes them easy to manipulate. Mugabe is a great exponent of this, constantly blaming White imperialism for Zimbabwe’s ills while happily pocketing the aid and loans he gets from these same “imperialists”.

If the official Western aid agencies get so easily taken in, how much easier is it to delude ordinary government officials like Soames? Soames said he was “touched” by his “extraordinary” meeting with Mugabe. The only extraordinary thing about it was how easily he was taken in by Mugabe. Every time Soames opens his mouth, out pop even more pearls of naiveté. Mugabe, like many evil, vicious dictators, is according to all reports, immensely likeable when he wants to be. So, it is said, was Hitler, Amin, Saddam Hussein, Gaddafi, Putin. Like all of them, Mugabe knows exactly how to charm the people he thinks can serve his evil purposes, and Soames must have been easy meat for him.

But – and this is where the appalling insult to all Zimbabweans lies – in all Soames’ praise of Mugabe, where was his expression of concern at the abuse of Zimbabwean citizens at the hands of the regime? The false imprisonments, the abuse, beatings, torture, dispossessions, executions? Where was the hope that the next elections would be fair?

Well, if Soames could not even express concern at the continuing dispossession of White Zimbabwean farmers, he certainly isn’t going to worry about the treatment of Black Africans.

Soames’ visit was proof, if any was needed, that colonial thinking is alive and well in the British government. Its concern has always been only with its relations with African nations, but never – apart from a great deal of empty talk and rhetoric – with the plight of their citizens. The government even supported Apartheid until Western public opinion forced it to change its mind. It has got it the wrong way round: if we want a free and fair society, our concern should always be with the citizens. And if there is conflict between citizens and their government over abuses of human rights, the concern of Britain should always be with the citizens, especially if it wants to be, as it keeps claiming, a defender of democracy.

First, despite all the official British hype of criticising Mugabe, the support that the UK, in common with all the West, gives to Mugabe in terms of aid and loans has been a major factor in keeping him in power. In 2015, Western and Chinese aid and loans added 35% to Zimbabwe’s revenue – which, of course, means Mugabe’s income. In the period 2016-2018, this will increase to a massive 80%. To that must be added all the expenditure by Western NGOs in Zimbabwe. Because, make no mistake, even if ALL the aid and loans went to aid the citizens (which it doesn’t), that would still be helping to keep a vicious regime in power.

Second, it is a little known fact, but if the UK and the West genuinely wanted to get all Africans out of poverty, they could have done so years ago. It would not have been (in fact, it still would not be) difficult to do. But instead, they have preferred to help keep corrupt, repressive governments in power – again, putting the nations ahead of their citizens.

Third, the UK (in common with all Western nations) allows its corporations and businesses to keep exploiting their African staff and workers, paying them not only far below their Western staff for doing exactly the same jobs, but also far below what they are allowed by law to pay in their own countries. If the UK had any real interest in African citizens, it could stop this abuse virtually overnight. Believe it or not, many Western businesses could have been paying their African employees at full Western rates ever since the end of colonialism.

I suppose Soames’ behaviour could be excused on the grounds that he was only behaving according to the mores of the society he lives in. But politicians should be able to rise above such considerations.

All in all, Soames could not have made it clearer that Zimbabwean citizens don’t matter to him. Yes, that was a kick in the teeth for them.