This morning I met a mother with her small child - who was being a bit naughty - so in order to scare him into behaving well, she threatened to report him to a police officer who was standing nearby - who would dish out instant punishment and untold suffering upon him. 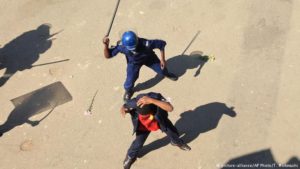 The look on her son’s face was of pure terror, as he never took his eyes off the police officer – obviously expecting the law enforcer to pounce on him unexpectadly.

Of course, the police officer had no knowledge of the mother to son threat, and so took no notice of the two.

However, this disturbing incident got me thinking as to whether such threats by parents, as a means of disciplining, is not the root of our unhealthy fear of police brutality, especially when wanting to exercise our constitutional and democratic right to peaceful demonstrations.

Most people – including me – have, at some point during childhood, been subjected to such threats.

Is it then any wonder that whenever we have genuine grievances against any institution, including government, and we feel the need to engage in peaceful demonstrations, most of us are apprehensive at the thought of police presence and possible brutality?

Most people have truly had enough of the suffering that they have endured for far too long – additionally, feeling that those in authority are taking no notice – and are all too eager to make their voices heard by peaceful demonstrations, but their unhealthy fear of police brutality is more than enough to keep them off the streets.

I refer to it as ‘unhealthy’, because people would not normally have such a fear – no matter the pain inflicted – as long as they are eager and desperate enough to demand their voices be heard.

We have a Section 59 constitutinal right to peaceful demonstrate.

Thus, with numerous Zimbabweans bearing so many grievances, why do we not witness magnificent multitudes of people on the streets demonstrating againt their apparent neglect by those in power?

Admittedly, in the 1990s, there were major demonstrations, which were largely violently quashed, but such stiffling of popular dissent can never be main source of our present day fear.

There has to be a deep-seeded terror of police violence, which I still attribute to the threats we received in infancy.

The brutality we were subjected to later on in our lives only served to further reinforce this unhealthy fear, thereby, ingraining it in our minds.

We need to stop using such threats towards our children – which might immediately yield the desired result – but will, in the long-run just turn them into fearful adults.

I am not, by any stretch of the imagination, advocating for us to be anti-police, or to fight for regime change through the streets.

We have a watershed election next year in 2018, so there is absolutely no need – and definitely, no appetite – for a street-drive regime change, but a ballot box-led revolution.

Nonetheless, in any democratic society – even a pseudo one like ours – peacefully demonstrating is a right that every citizen is entitled to, as a means of making their desires heard loud and clear.

This should be engaged in boldly, notwithstanding any form of repression, as the people’s grievances can not be simply washed away by water cannons, or covered up by tear gas.

As long as people feel ignored by those in authority, they need to fearlessly make their demands known, even through peaceful demonstrations.

Actually, it is not the demonstrator who is the problem – and should not be the one to be vilified by the police.

The very fact that people feel the need to constantly demonstrate is an unambiguous sign there is something seriously wrong with those in authority, who would clearly be reneging on their responsibilities towards the people they are supposed to serve and wait on.

As such, the best way to curtail demonstrations is to attend to the needs of the people, not by arresting, tear gassing, or pepper spraying them.

The people have never demanded anything out of the ordinary.

Demanding electoral reforms in line with the constitution, or  the availability of cash in the economy, can hardly be labelled unreasonable and worthy of suppression.

Even if peaceful demonstrators urging a leader – whom they consider to have failed – to resign, is constitutional.

In a democracy as the United States (US) we witness nearly daily ‘Dump Trump’ demonstrations, which are seldom brutally suppressed as regime change machinations.

We now need to discard all forms of unhealthy fear of the police and boldly make our voices heard loud and clear, as our constiutional right, despite any repression.

* Tendai Ruben is a social justice activist, writer, author, and speaker. He is available should anyone want him to speak at any gatherings. Please call +263782283975, email [email protected]com